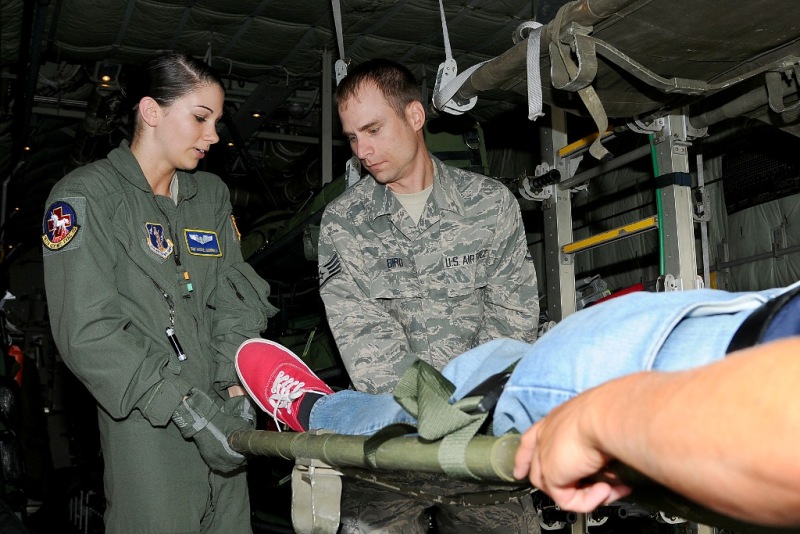 other agencies to prep for storm season

This exercise was a joint effort with federal, state and local resources to practice evacuating patients in the event a category 3-5 hurricane struck southeast Louisiana. The participants included the 130th Airlift Wing and 167th Aeromedical Evacuation Squadron, both from the West Virginia Air National Guard; as well as the Louisiana Department of Health and Hospitals and the Care Ambulance Service.

Home to the Louisiana Air National Guard’s 159th FW, New Orleans NAS-JRB was the center of gravity of relief operations during Hurricane Katrina. “It is a natural choice to serve as one of the locations to stage patient movement in the event of future hurricanes,” said Col. Thomas Sostarics, 159th FW Commander. “Louisiana has had much experience dealing with hurricanes, however if the track and intensity will affect southeast Louisiana, Louisiana will need assistance.”

The patient population of Louisiana is concentrated near New Orleans and with most of the population evacuating toward central and north Louisiana, hospitals can get quickly inundated with evacuees. Louisiana, together with the Federal Emergency Management Agency, United States Northern Command, Louisiana National Guard and U.S. Transportation Command have been developing a plan to aeromedically evacuate more than 1,000 patients to other states.

“Many states have National Guard aeromedical evacuation teams as well as C-130s and other transport aircraft,” said Sostarics. “It is common for other states to come to the aid of another and, having the West Virginia Air National Guard come to Louisiana for this joint exercise is just one such example”.

“We are a big Guard family, and we stick together,” said Maj. Trina Young, Flight Nurse with the 167th Aeromedical Evacuation Squadron.

“We’ll evacuate our F-15s out of harm’s way, then return to fulfill our state mission,” said Sostarics. “Our citizens turn to the National Guard during time of disaster and other situations that can overwhelm the state and cities. By bringing in aeromedical assets, we can help our citizens while getting training for their wartime mission.”