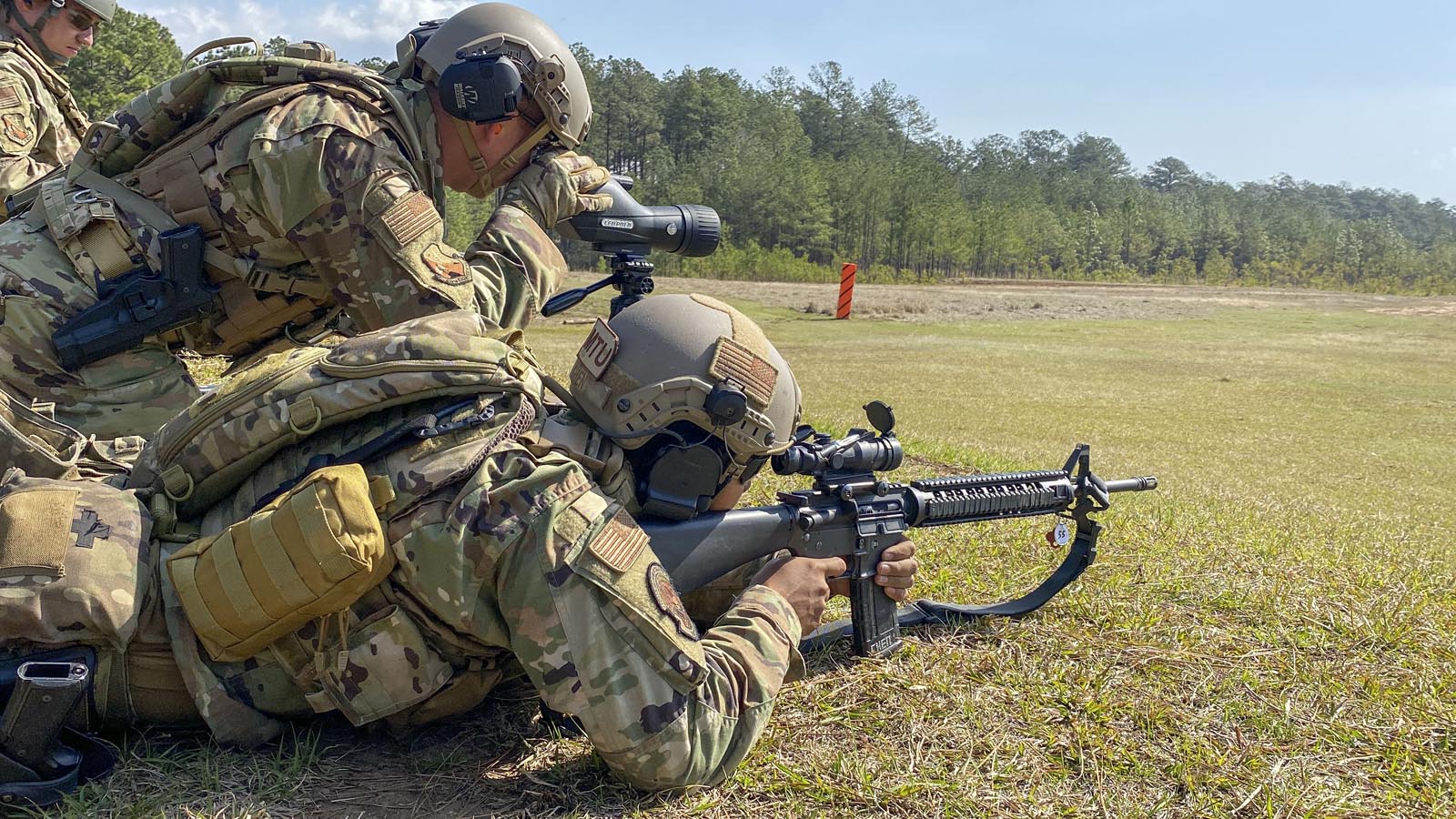 PINEVILLE, La. –The Louisiana National Guard’s top marksmen from around the state gathered at Camp Beauregard in Pineville for its annual The Adjutant General’s Match, March 16-18.

Forty-nine Soldiers and Airmen put their skills and training to the test with the state’s top 20 shooters earning a spot on the Governor’s Twenty. Each team consisted of four shooters. “The teams can be all-new shooters or a mixture,” said Command Sgt. Maj. Jonathan Chapman, a Farmerville native and the state marksmanship coordinator.

Chapman said he models the competition after the regional and national level competitions that Soldiers and Airmen can compete in. The matches are designed to improve combat readiness by exposing shooters to stressful situations.

Throughout the competition, shooters’ rifle and pistol skills are challenged in areas such as precision shooting and reflexive fire. Shooters complete a total of eight matches. 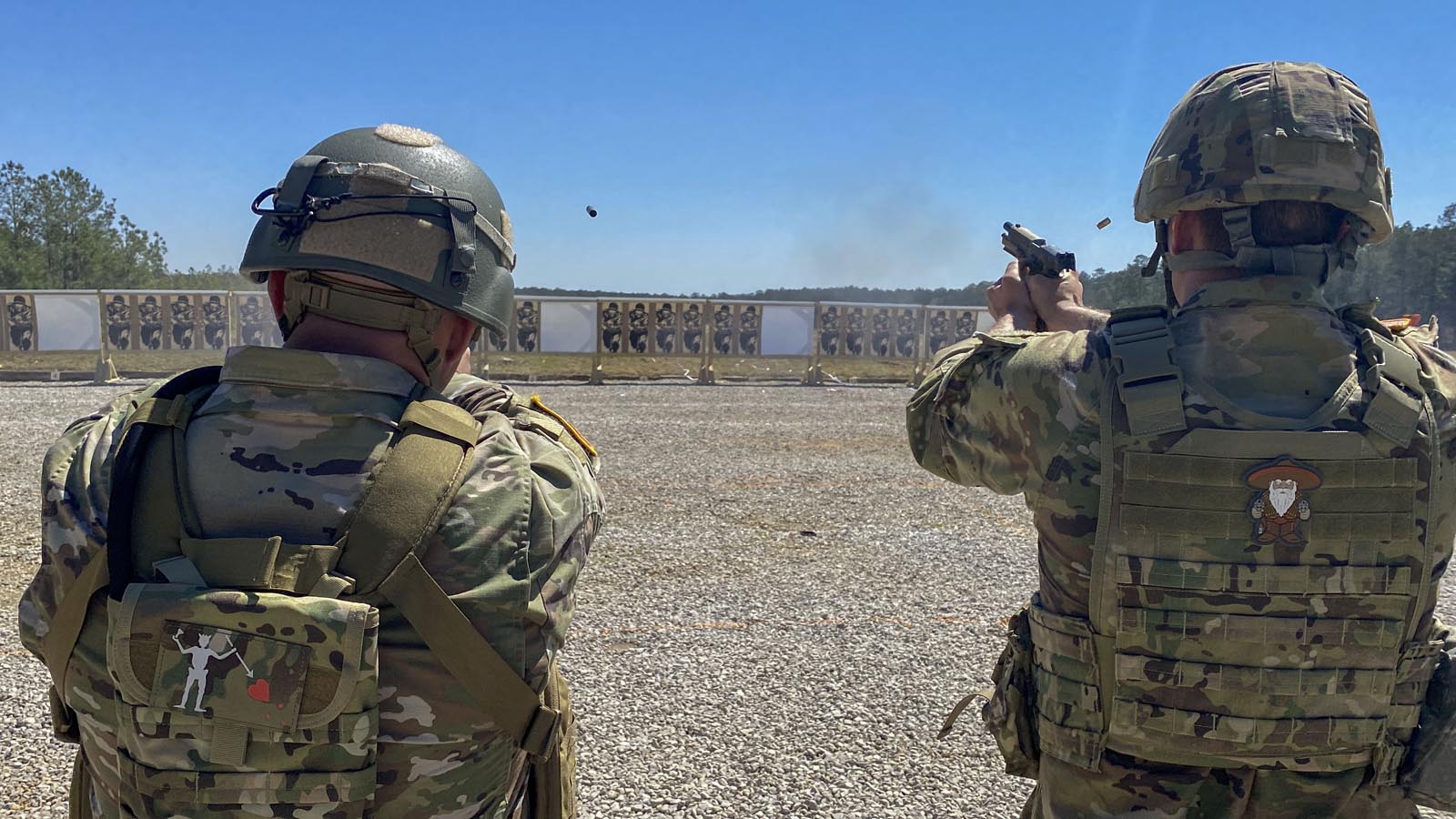 “One of my favorite matches is the Rifle Rundown match,” said Sgt. Kalen Begnaud, a Carencro native with the LANG’s 415th Military Intelligence Battalion. “You start from the 300-meter line and work your way up to the 100-meter line in different firing positions and time limits. I enjoy how it tests your ability to fire in different positions while keeping up with the time limits.”

“These are the core matches that shooters will see at any competition, and these are the ones that… have the most points available,” said Chapman. “If the Soldiers can do well in these, they can place high in the competition.”

For veteran shooters like Air Force Master Sgt. Ronald Duvoisin, with the 159th Fighter Wing, it was his first time being a team captain.

“I felt honored to have this trust placed in me by Master Sgt. Tanzey and Master Sgt. Krail (NCOIC and ANCOIC of the Louisiana Air National Guard 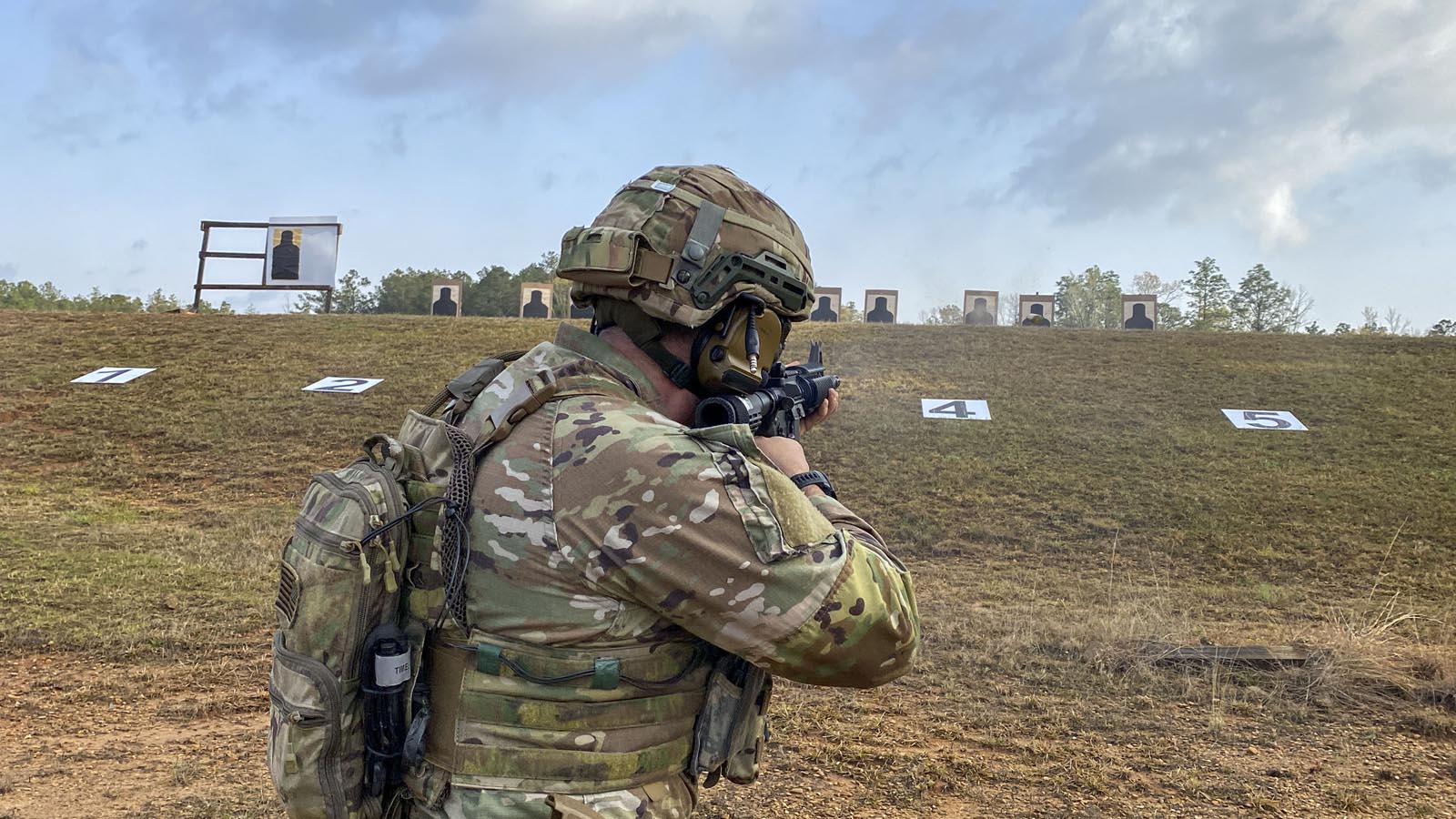 Marksmanship Training Unit). Especially considering the caliber of shooters that were on my team,” said Duvoisin. “Tech Sgt. Boniol earned first place shooter overall a few years ago, Staff Sgt. Julia Lobre was second overall just last year and Tech Sgt. Galmiche is a very solid marksman all around. To be the captain of such a team made me extremely proud and grateful.”

The TAG Match means more than just shooting and competing; it gives Soldiers and Airmen a chance to get to know one another, while exchanging shooting techniques.

“They get to meet Soldiers and Airmen from all over the state … they can bring what they learn back to their unit, and it will help all the way down to the lowest level Soldier as far as weapons training goes,” said Chapman.

Chapman said that Soldiers and Airmen that want to compete in the future should get with their chains of command so that they can register the shooters and teams for the next competition.

Duvoisin’s advice for shooters wanting to compete is to just go for it.

“Even if you’re not a great marksman, go ahead and compete if you can. Focus on safety and on building your fundamentals,” said Duvoisin. “Practice, practice, practice, but make sure your practice is perfect. Get assistance from someone who actually knows what they’re doing … read books, watch videos and never stop learning or shooting.”

At the end of the competition, shooters attended a dinner and ceremony to receive awards for the top shooters and the top team. 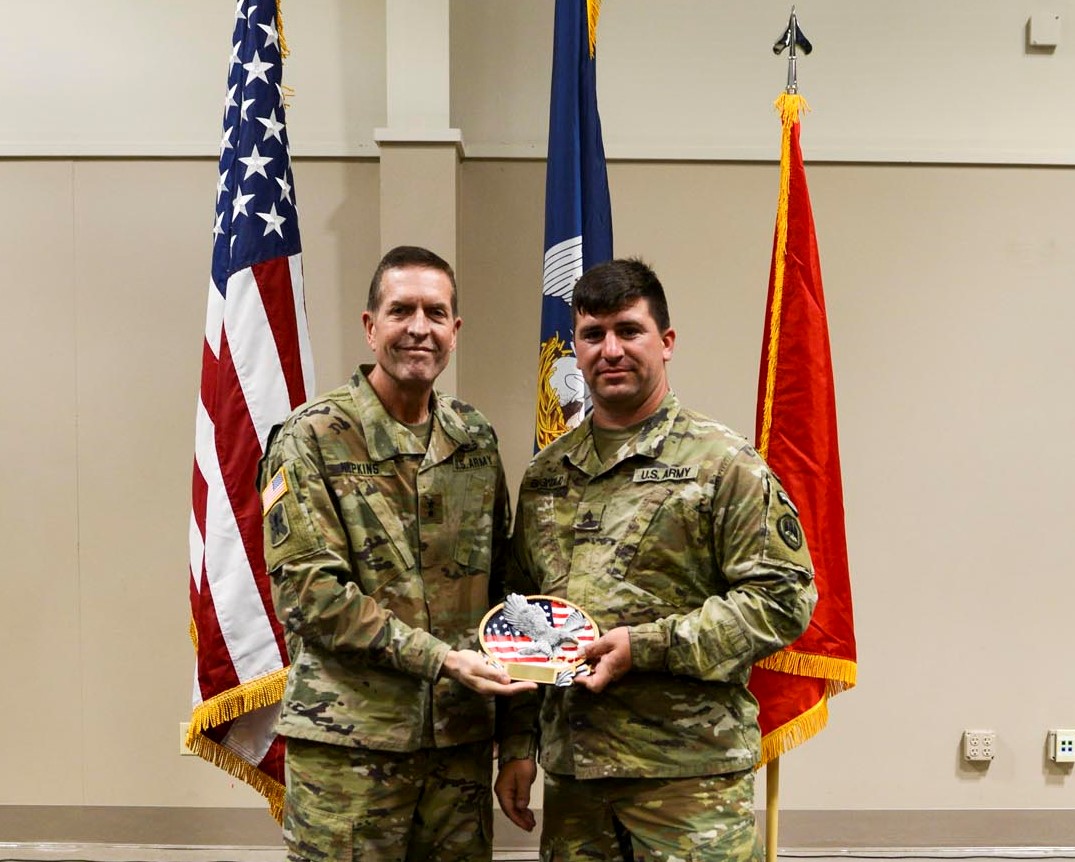 “I’m extremely proud of you guys … you guys are the best of the best for our state, and I’m very proud to be here to see the Governor’s Twenty,” said Hopkins. “I want to tell you all congratulations on a job well done on representing your units, peers and the state of Louisiana.”

This year Begnaud was named Top Gun with the highest overall combined score. Begnaud also had the highest scores in the Rifle Rundown match and highest individual score for rifle.

“It was exciting to hear my name called for top overall shooter,” said Begnaud. “It’s obviously what everyone competing at the TAG Match hopes to accomplish.”

Army Sgt. Antoine Stewart, a resident of Pineville, had the highest overall score in the Pistol Antibody Armor match and highest individual score for pistol. 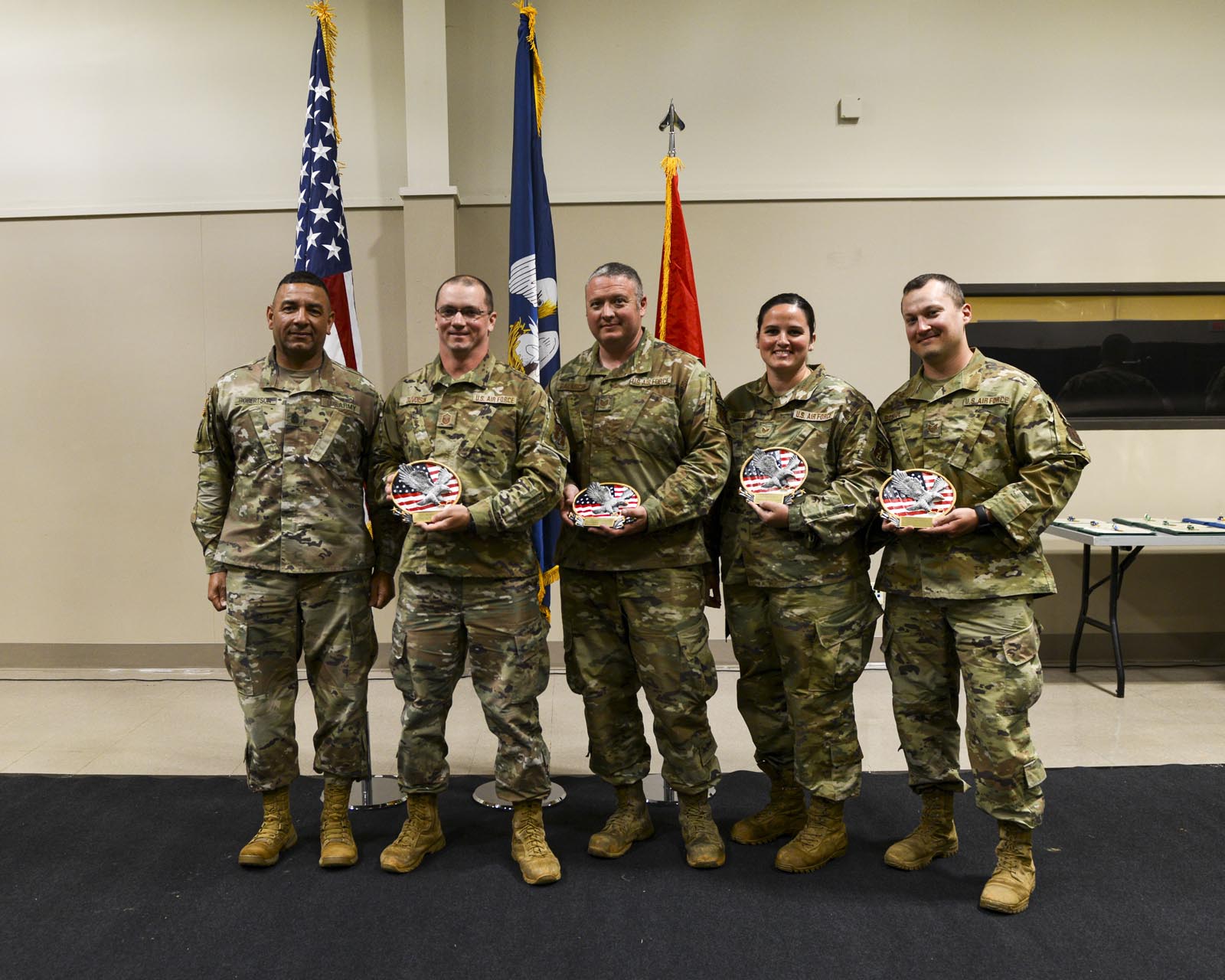 “Our team came in first by applying the fundamentals of marksmanship when and where it was needed during the competition. It means that the hours of dedicated training bore fruit,” said Duovisin. “One thing to remember is to be humble even in victory. Until every single shot is an ‘X,’ there is always something we could have done better.” 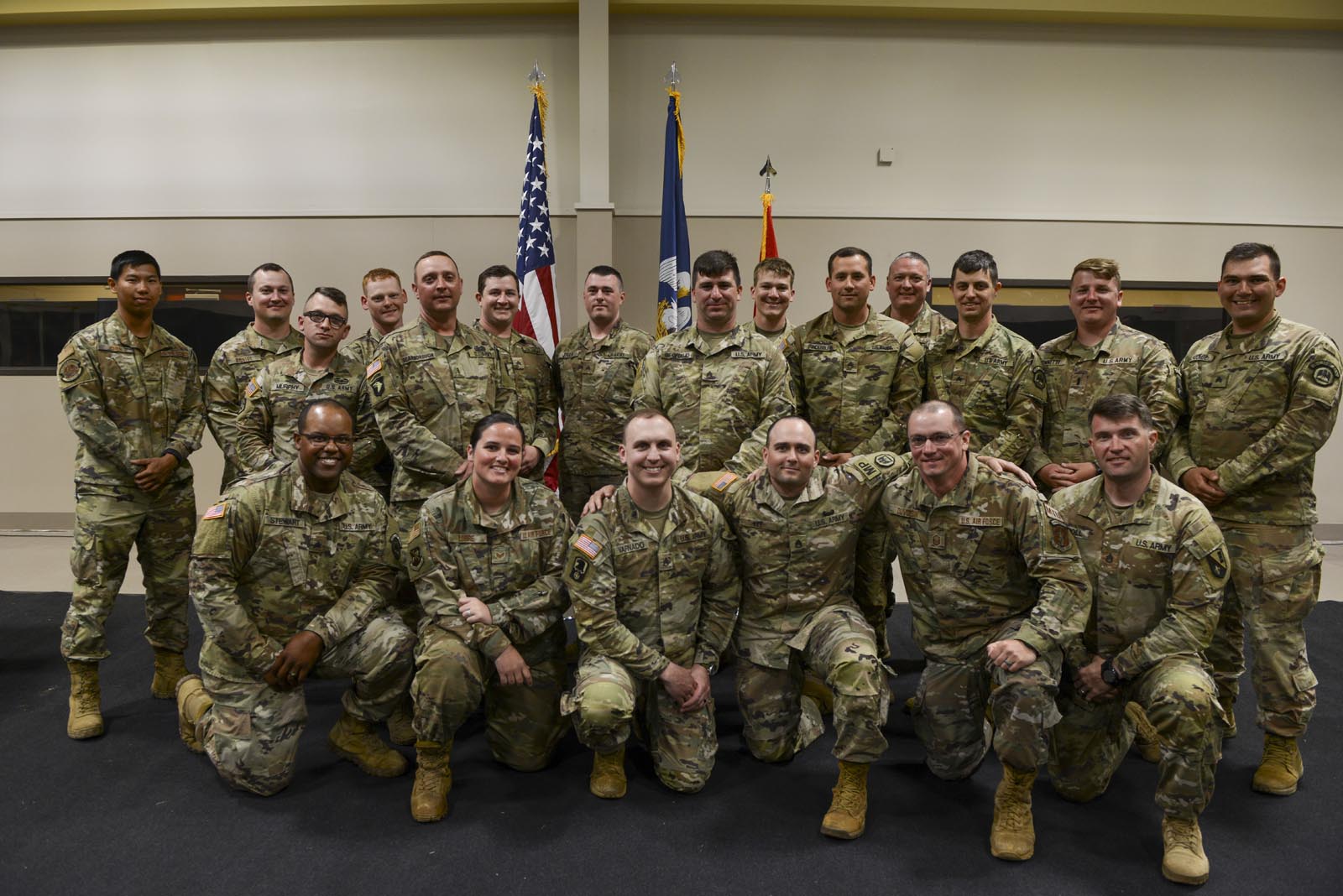 In addition to the top twenty competitors being awarded a Governor’s Twenty tab to wear on their uniforms, the top 10 percent earn points towards a bronze EIC badge. These shooters can then compete at regional and national levels to earn more points towards the bronze badge, followed by silver and then the gold EIC badge, which is the highest military marksmanship designation.

The top eight Soldiers and Airmen will be considered for the Louisiana National Guard marksmanship team to compete at the regional and national level.