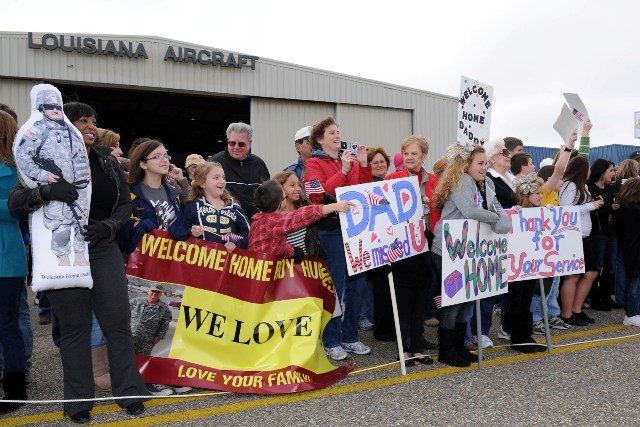 “We are forever grateful for the service and sacrifice of these brave men and women, and it’s an honor to welcome them home just in time for the holidays,” said Governor Bobby Jindal after greeting the Soldiers off the plane. “We must also pray for the Soldiers who are still fighting overseas in defense of our freedom and will not be home for the holidays.”
More than 70 Soldiers from the 239th, based in Carville, returned from their 365-day deployment to Iraq in support of Operation New Dawn where they conducted Police Transition Training for Iraqi law enforcement officers. Approximately 40 Soldiers from the unit returned home throughout the state Wednesday in an effort to get the unit members home as soon as possible.

Brig. Gen. Glenn H. Curtis, the adjutant general of the Louisiana National Guard said, “The Soldiers of the 239th Military Police Company performed beyond all expectations. Their professionalism and proficiency allowed them to accomplish every mission they were assigned.”

Thelma Ruiz of Gonzales welcomed home two of her sons with the unit on Wednesday and her nephew today. “I couldn’t feel more proud of their service.”

“It’s a bittersweet day,” said Capt. Katasha Ceaser of Monroe, commander of the 239th. “On one hand, it is tough separating from each other after having bonded so well over the past year … but it is great being back with our real families!”

Members of the 239th Military Police Company have participated in deployments around the world including Cuba, Kuwait, Haiti, Iraq, Italy, Germany, Belize and Honduras. The 239th has participated in Emergency Operations/Recovery Operations for the State of Louisiana, including hurricanes Katrina, Rita, Gustav, Ivan and Ike. The 239th also provided support to Task Force Gator as well as the Operation Deepwater Horizon response.

“Their hard work in mentoring and training the Iraqi police was certainly a contributing factor to bringing this mission to an end,” said Curtis. “We’re certainly proud of the 239th‘s accomplishments, and we’re even more excited about getting them home to their families before Christmas.”