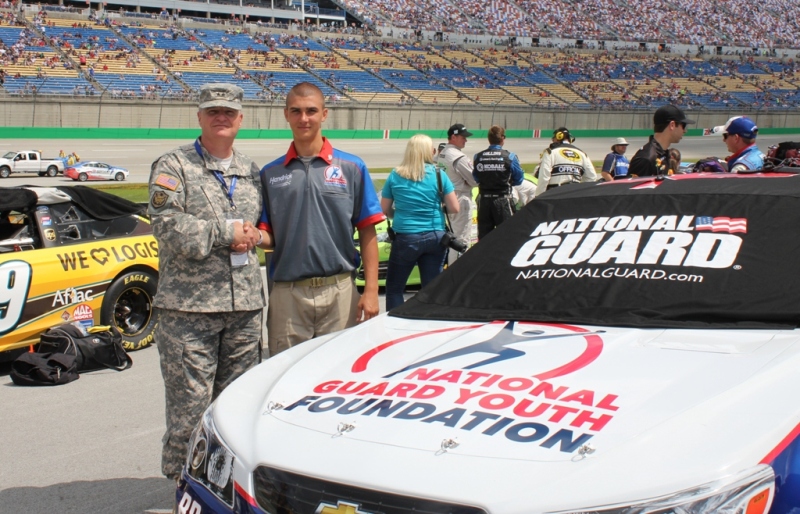 SPARTA, Ky. – Young men and women with the National Guard Youth ChalleNGe Program were given a full-access pass to all NASCAR had to offer at this year’s Quaker State 400 race at the track in Sparta, Ky.

The National Guard Youth ChalleNGe Program is a 17-month voluntary program serving 16- to 18-year-olds who have dropped out or are at risk of dropping out of school. The program – which includes a 5.5-month residential phase and 12-month mentoring phase – provides education, skills and guidance to help instill a sense of self-esteem, integrity and character to disadvantaged youth who might otherwise be left behind by society.

The excitement began Friday morning with a press conference announcing the sponsorship and highlighting the Challenge programs.

YCP Cadet Jeremy Suhor, of Metairie, La., was selected to represent Louisiana at the event based on a written essay and good merits.

On June 10th, Suhor joined four other cadets from Kentucky and Indiana for a special, behind-the-scenes tour of Hendrick Motorsports in Charlotte, NC. While there, Suhor and the other cadets were filmed while discussing how ChalleNGe has helped them change the course of their lives.

“I never expected to be at my first NASCAR race,” said Suhor, who attends the Carville, La., campus. “I’ve had a lot of great opportunities since I’ve been in Challenge.”

In between the rain drops, Suhor and his fellow cadets were treated to garage tours, a meet and greet with Earnhardt, Rick Hendrick, owner of Hendrick Motorsports and also University of Kentucky Basketball coach John Calipari.

During the meet and greet, Earnhardt told the cadets and the crowd that relationship he has had with the National Guard has been one he has had a lot of fun with and takes very seriously. He said he was honored to drive his car with the foundation logo in the race and remains excited to be a part of the program.

“These are great kids, but they’ve fallen off the radar for any number of reasons. We have to give them the full attention they need and deserve,” said Earnhardt. “I’ve seen how the National Guard Youth Foundation and ChalleNGe do that and get them back on track, which is life-changing and so critical.”

Although Earnhardt didn’t drive the car into victory lane on Sunday, the clouds did part long enough for the cadets to enjoy the full race a day late. They were still trackside presenting the colors for the pre-race festivities and had the time to walk pit road and take some memorable snapshots with their favorite cars.  The cadets eventually found a front and center seat for the race in a suite above the start/finish line of the track.

More than 80 percent of teens that graduate this two-phase program go on to continue their education, join the work force or enlist into the military.

To learn more about the Louisiana National Guard Youth ChalleNGe Program, visit the website at http://geauxguard.com/louisiana-youth-challenge/