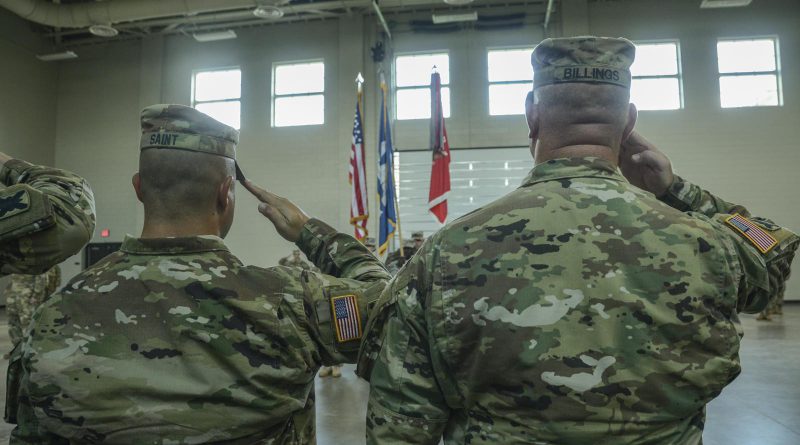 Saint, a resident of Carville, assumed command from Lt. Col. Rob Billings, a resident of Baton Rouge, who has served as commander since August 2015. Billings is currently the deputy future plans officer for the LANG.

“As I look out on this team for the last time as your commander, I can say that I am humbled to be in your presence and honored to have had the opportunity to be your leader,” said Billings. “Tigators you’ve done a lot and there’s still a lot left to do. Maj. Saint is the kind of aspiring leader who will serve this team well and continue the tradition of quiet professionalism.”

Maj. Gen. Glenn H. Curtis, the adjutant general of the LANG, stood before the battalion and praised both Saint and Billings for being great examples of what it means to be a leader and wished them well on their new endeavors.

“Rob, you’re a great guy who has done a phenomenal job leading these Soldiers. I appreciate all the work you’ve done and what you’re doing now,” said Curtis. “Will, congratulations on your battalion command. There are very few officers that get the privilege to command a battalion, but you’ve earned the right to do that.” Saint, who began his career with the 769th, received his commission through the Officer Candidate School in Louisiana in 2001. He holds a Bachelor of Science in Liberal Arts from Excelsior College in Albany, New York. He currently works full-time as the commander and administrative officer for the 769th.

Before taking command of the 769th, Saint commanded the 62nd Civil Support Team, the LANG’s only fully active duty unit.

“Lt. Col. Billings, thank you for your service and leadership of this battalion over the years. I never imagined that what I started over 21 years ago when I walked into a recruiting office at the 769th Engineer Battalion would lead me to the front of this formation,” said Saint. “I’m truly grateful and humbled by this opportunity. I vow to lead to the best of my ability, forever focused on the mission and readiness of the battalion. This is without a doubt the greatest professional honor of my life.”