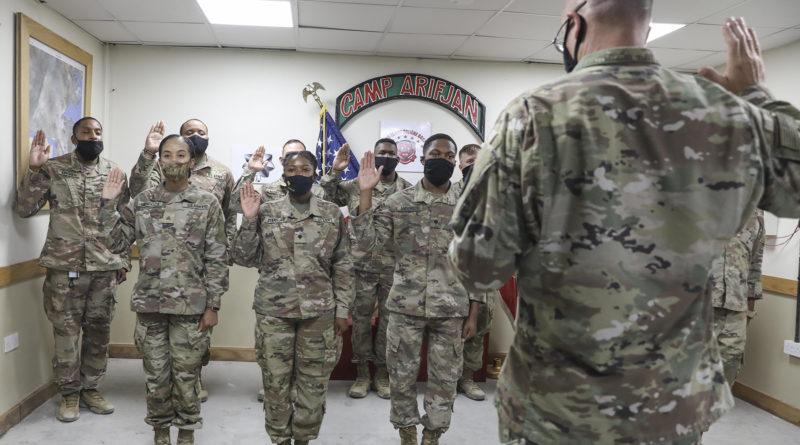 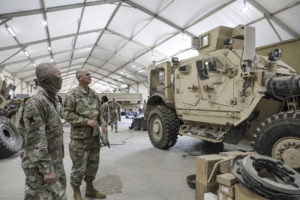 The Tiger Brigade has been conducting operations since the beginning of the year in the Middle East in support of U.S. Central Command’s (CENTCOM) Operations Inherent Resolve and Spartan Shield.

Upon arrival in CENTCOM, Waddell and Ockman met with Soldiers from 256 IBCT to include the Tiger Brigade’s Military Intelligence Company, support battalion and infantry battalions.

While visiting the Soldiers, Waddell expressed his thanks to the dedication of the Soldiers who continue to execute their missions in 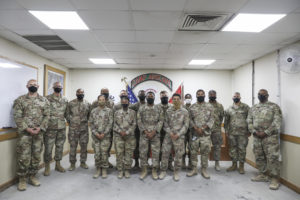 challenging environments with professionalism and honor. He also passed along greetings and thanks from Louisiana Gov. John Bel Edwards

Col. Scott Desormeaux, the 256th IBCT commander, and Command Sgt. Maj. Gerald Comeaux, the senior enlisted advisor of the 256th IBCT, briefed Waddell and Ockman on the hard work and accomplishments of the Tiger Brigade.

“The hard work and dedication of the TF TIGER soldiers during this unique mission set has been nothing short of amazing.” Said Desormeaux. “The 256th IBCT has seamlessly transitioned from COVID duties, to hurricane response, to combat operations in the Middle East.” 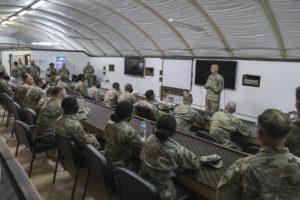 After visiting the Tiger Brigade, Waddell and Ockman visited with multiple other LANG units 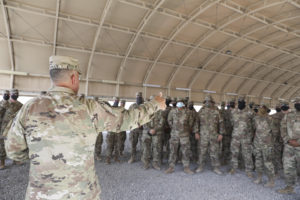 that are currently deployed to CENTCOM to include the 527th Engineer Battalion, B Company, 136th Expeditionary Signal Battalion and the 239th Military Police Company.

While overseas visiting Soldiers, Waddell and Ockman had the opportunity to promote several Soldiers, administer the oath of enlistment and coin several superior performers throughout the deployed units. 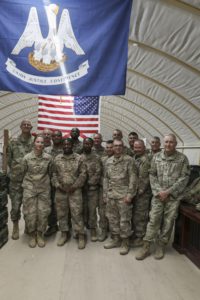 After the promotions, reenlistments and awards, Waddell told the Soldiers to be excellent every day and that it was an honor and privilege to be a part of their career accomplishments.