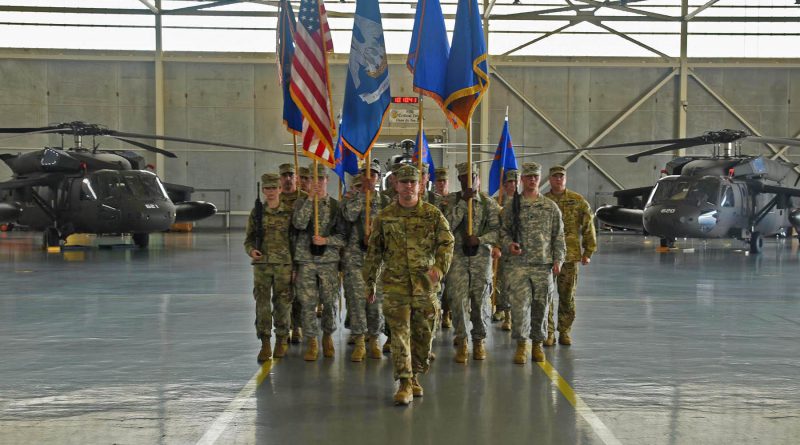 Plunkett, a New Orleans native, enlisted in the U.S. Marine Corps in 1983 where he served as a helicopter repairer. He joined the LANG in 1987 and commissioned as a warrant officer in 1989. In 1998, he commissioned as an aviation officer in the Medical Service Corps.

“I’d like to thank General Curtis for giving me the opportunity to command such a great organization,” said Plunkett. “We’ll continue to be vital to our nation’s overall welfare and security.”

Plunkett has deployed with the LANG twice in support of Operation Iraqi Freedom and once in support of Operation Enduring Freedom. He has also supported several state emergency responses, most notably Hurricanes Katrina, Andrew and Isaac, the Deepwater Horizon Oil Spill and the major floods in 2015 and 2016. To date, Plunkett has logged over 2,900 flight hours and over 500 combat flight hours.

He has a Bachelor of Science in physical therapy from Louisiana State University. He also holds two master’s degrees from the University of New Orleans and the U.S. Army War College in education and strategic studies. “There is no greater privilege in an officer’s career than that of command,” said Bonnette. “To the Soldiers, non-commissioned officers and officers of the 204th Theater Airfield Operations Group and all the units within this command, I know firsthand that there is no better organization that I could be part of.”

Bonnette joined the LANG in 2004 and has been a part of several state emergency responses, most notably Hurricanes Katrina, Rita, Gustave and Ike, the Deepwater Horizon oil spill, and the major floods in 2015 and 2016. He has also deployed twice with the LANG in support of Operation Iraqi Freedom, Operation New Dawn and Operation Enduring Freedom. To date, Bonnette has logged over 2500 flight hours and more than 350 combat flight hours.

The 204th is one of only two units of its kind in the entire U.S. Army. Their federal mission is to provide command and control, staff planning, supervision and standardization of all Army airfields and air traffic services in theater with them.