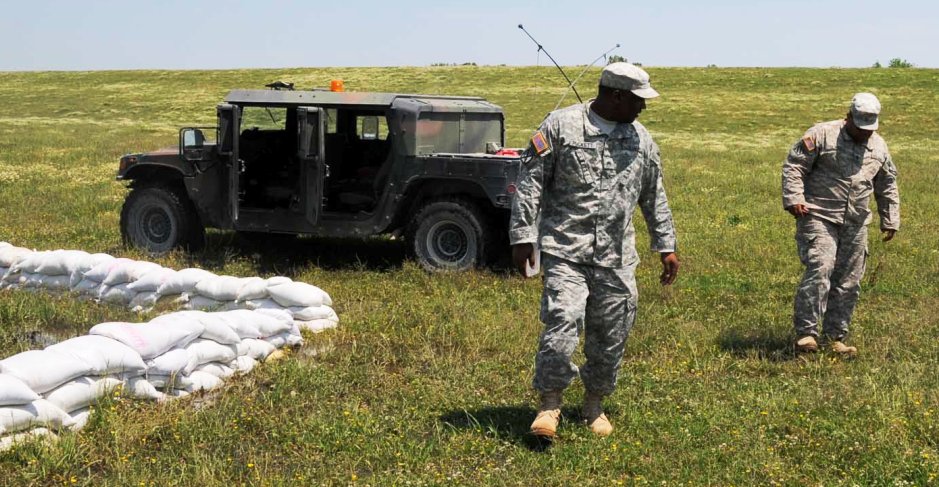 The Guardsmen drive Humvees along the levees, as well as patrol on foot, to note any changes in the landscape that could signal potential problems that are then reported to the Army Corps of Engineers.

These 22 Soldiers patrol 70 miles of levee, monitoring the water levels, seepage from under the levees and the formation of sand boils.

Guard liaison officers 2nd Lt. Miles Stutes and Sgt. Timothy Puckett are two of the Soldiers working to ensure information is being disseminated between the Guard, state and parish agencies and help East Carroll Parish prepare for possible evacuations if flooding ensues.

Our concern right now is seepage and sand boils, which are basically small tunnels under the levee that let the river water funnel through, [causing erosion] from the bottom up, said Stutes. When we see new ones, or see that one is getting bigger, we report that to the Corps of Engineers for their evaluation.

As of May 13, the Louisiana National Guard had identified 46 sand boils in East Carroll Parish.

Stutes reiterated that a plan that includes arranging for buses for evacuations and letting residents know of shelter sites in their area must be in place in case the unexpected happens.

Though the inner levee, known as Old Levee, was topped this week, officials do not foresee the main levee being topped, said Stutes.

Brig. Gen. Owen Monconduit, commander of the LANGs 225th Engineer Brigade, made a site visit to the levee to inspect conditions, May 12. He also visited with his Soldiers and offered his encouragement and praise for the work the Guardsmen are doing.

You all are doing a good job out here, said Monconduit, presenting challenge coins to Stutes and Sgt. Johnathan Ellison for recognition of their efforts and work for the local community.

LAKE PROVIDENCE, La.  Soldiers from the Louisiana Army National Guards 528th Engineer Battalion inspect land behind the levee in East Carroll Parish to monitor water levels from seepage and to locate new sand boils for further investigation by the Army Corps of Engineers, May 12, 2011. Groups of sand boils in the area have already been marked and sandbagged. (U.S. Army Photo by Sgt. Robin Carpenter, Louisiana National Guard Public Affairs Office/Released)