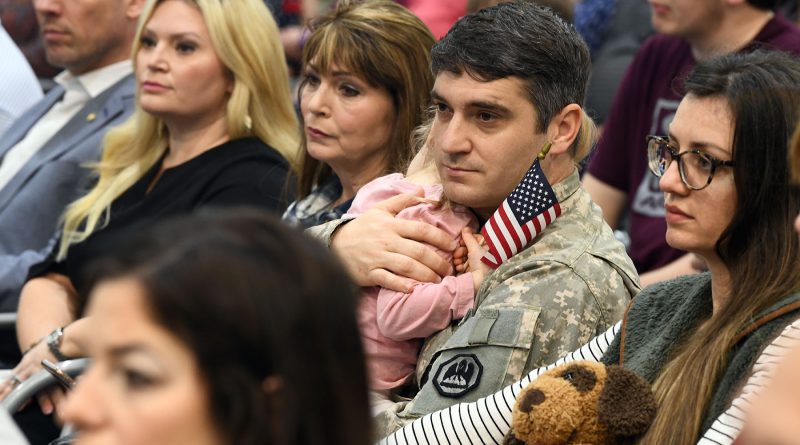 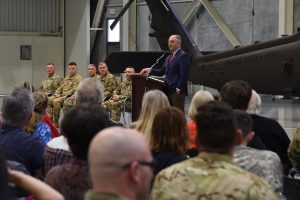 More than 70 Guardsmen with the unit are scheduled to deploy to various countries in the Middle East starting this week. Including premobilization training at Fort Hood, the Soldiers will be away from home for nearly one year. Once overseas, they will provide air movement support and medical evacuation support to ground forces.

“I just want you to know, as a fellow American and as an Army Veteran, how immensely proud I am to call you my brothers and my sisters. There is no nobler calling than that of a Soldier protecting life and liberty,” said Edwards. “As a fellow Louisianan and as governor of a great state, I cannot be more confident that you will execute your mission because you’re well trained, you’re well lead, and you’re disciplined.”

“I thank you from the bottom of my heart for your willingness to serve our nation and our state,” said 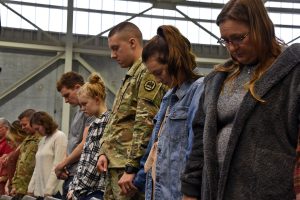 Maj. Gen. Glenn H. Curtis, adjutant general of the LANG. “We’ve been in this war for almost 19 years, and I know that a lot of you have been involved from day one. I would ask the old guys to take care of the young ones who haven’t deployed. Mentor them through the deployment and let them know that everything will be ok.”

Staff Sgt. Lawrence Imhoff is on his second deployment with the 1-244th. His little brother and best friend, Spc. Stephen Imhoff, is deploying for the first time. The brothers, both crew chiefs who live in New Orleans, grew up in a military family with a father that served in the Air Force for 20 years.

“We’ve lived together for probably 15 years of our life, so it will be really cool to have him as a mentor on my first deployment,” said Stephen. 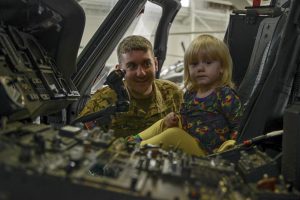 “I think a lot of the younger guys are going to be stressed when we get there, but once we get into the groove, we’ll come together as a team and it will be a lot easier,” said Lawrence.

This will be the 1-244th’s fourth overseas deployment since 9/11. The aviation unit is also a key part of state emergency operations and has provided air evacuations and support for almost every state emergency, including: Hurricanes Katrina, Rita and Harvey, the Deepwater Horizon Oil Spill, and the multiple floods of 2016. The 1-244th also provides air support for the annual Christmas tree drop in the New Orleans area to help slow coastal erosion.