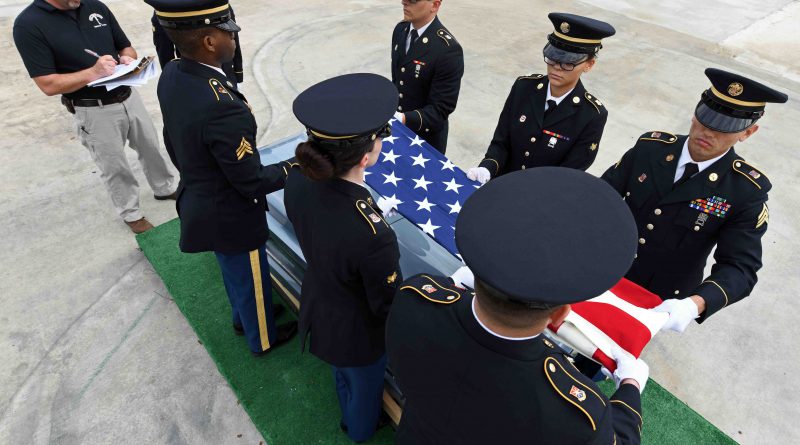 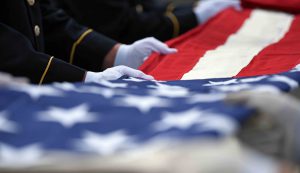 “We teach these Soldiers customs and courtesies that go beyond military funeral honors,” said Bryan Hines, an ARNG Funeral Honors national trainer. “We have to fit what the Old Guard would train in four weeks into a two-week time period.”

Guardsmen who attend the course have already been taught many of the fundamental pieces of rendering honors, including two, three and six-Soldier flag folds, how to conduct a firing party, funeral honors specific drill and ceremony, casket and urn sequences and uniform maintenance at a level one course held in their respective home states.

“It’s really a lot of small, detail-oriented stuff we are going over during the level two training,” said Kevin Palladino, another ARNG national trainer. “This includes things like making sure elbows are in the exact right place by your sides and your fingers are in the correct spot on your rifle. We need to make sure that there is a seamless standard that is followed in all 54 states and territories.”

“I volunteered our state to the National Guard Bureau as a national training site because we have outstanding training facilities and instructors,” said Command Sgt. Maj. Larry Johnson, LANG MFH program manager. “The Louisiana National Guard Military Funeral Honors Team rendered honors at 3,604 funerals in 2017 and 2018. We are currently averaging 157 funerals per month so far this fiscal year, and we are one of the most efficient programs in the country.”

Hines echoed those thoughts. In particular, he said the state’s central location in the country and the fitness resources available at Jackson Barracks are ideal for the training.

“Every day starts at 5:30 in the morning with physical readiness training,” he said. “Physical fitness is an important part of this job. In addition to presenting 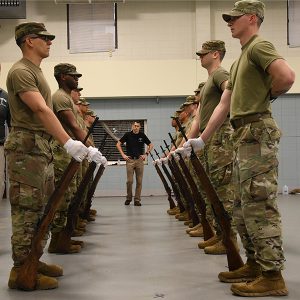 a Soldierly appearance, funeral honors can be an extremely physical job. Jackson Barracks provides the resources that we need to provide all of the training that we have to cover.”

“Training Soldiers in my state on the proper way to render final honors is important to me because it is one of the last memories that Veterans’ families will have of that person,” said Spc. Christian Lepage, a combat engineer in the Indiana National Guard who has been on her state’s MFH team for one year. “The way that my NCOs [noncommissioned officers] trained me made me want to be a trainer and help make our Guardsmen and our program better.”

Hines said that the National Guard currently renders roughly 85 percent of final honors for fallen Soldiers around the country. “Part of being in the National Guard is building local community support,” he said. “Going to those communities and honoring those Veterans who have passed is part of building that support.”

“Although the days were long and the training was difficult, I learned more in the last two weeks than I thought I ever could,” said Lepage. “I’m really looking forward to bringing my training back to Indiana.”