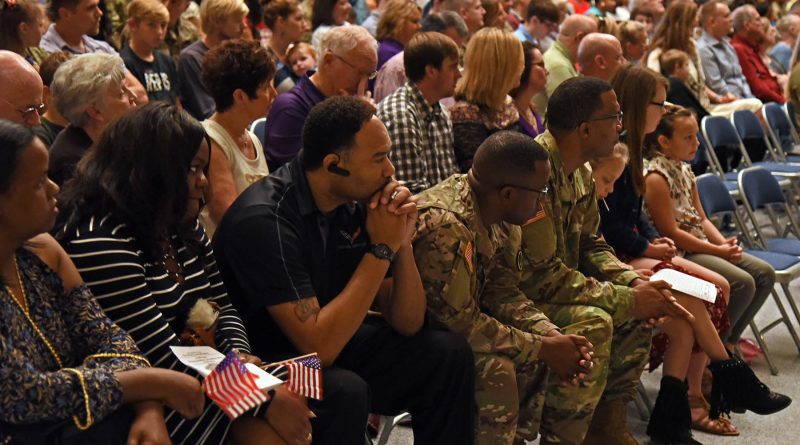 “The Soldiers of the 139th are technically, physically and mentally well prepared for our mission,” said Col. Stuart Burruss, a resident of Carville and commander of the 139th. “We have completed all required pre-mobilization training and look forward to the post mobilization training we will conduct at Fort Hood that is critical to a successful deployment.”

“It is my honor to be here on this bittersweet day. It’s bitter because we are about to send some of our loved ones overseas for a while, but it’s sweet because they are among the best of the best and I have the privilege of serving with them every day” said Curtis. “I want you [the families] to know how much I appreciate the fact that you are willing to let these men and women serve our nation and our state in uniform … it’s tougher being a family member at home than it is deploying.”

“Having our families’ support is absolutely critical to us being successful in our mission. Our Guardsmen must be able to focus on their mission down-range and feel confident that their family is capable of handling the day to day issues and problems that are sure to happen after we deploy,” said Burruss.

Burruss had one request of the families the Troops are leaving behind.

“I would ask that family members continue to stay in contact with their Guardsmen through email, phone calls and regular mail as much as possible,” said Burruss. “For many of our Soldiers this is their first combat deployment and keeping in touch with their family will help overcome the anxieties of very challenging work conditions and living environments.”

“It’s kind of a rush. We were told that we were going just a few months ago, so it’s pretty exciting,” said 2nd Lt. said Christine Winward, a resident of Baton Rouge and student at Louisiana State University. “The most challenging part is going to be being away from my family. My husband and I just got married a month and a half ago.”

The 139th, established in 2006, has been a crucial part of mission success in stateside emergency responses since its inception. During these missions, the 139th is tasked with commodities distribution to ensure that citizens affected by natural disasters have food, clean water, blankets, cots or anything else needed for survival. In the devastating statewide flooding in March and August of last year alone, the 139th distributed over 55 million MRE’s, over 97 million cases of bottled water and 668,000 tarps.

In addition to delivering essentials following disasters, the RSG is engaged in rescue operations as well. The group rescued over 101,000 people and over 3,500 pets from floodwaters in 2016.

The unit was also activated during the Deepwater Horizon Oil Spill and the earthquake in Haiti in 2010, Hurricane Isaac in 2012 and hurricanes Harvey and Maria this year.