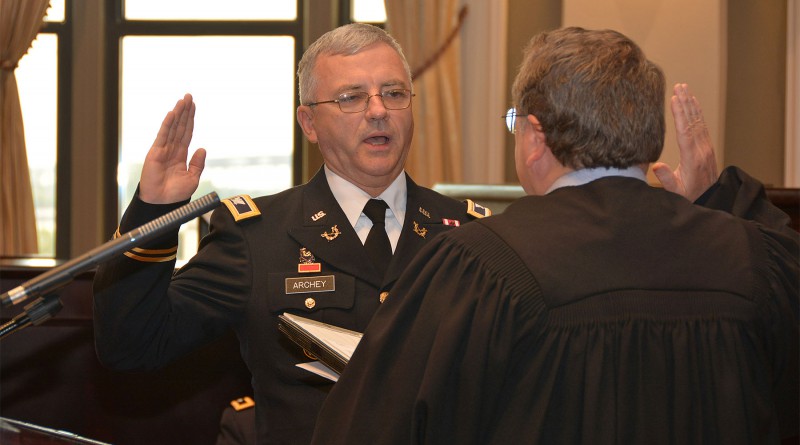 Archey, a resident of Baton Rouge, is the fifth judge to be appointed since the enactment of the Louisiana Code of Military Justice in 1974.

“To say I’m honored would truly be an understatement,” he said. “Going forward, I promise integrity, I promise that I will do the best I can with justice, and I’ll apply the laws.”

The Louisiana Military Judge presides over courts-martial of members of the LANG who are charged with offenses under the LCMJ, which parallels the Uniform Code of Military Justice.

The ceremony was especially unique, as it was the first to be held at the Louisiana Supreme Court.

“We hope this becomes a tradition in the Louisiana Guard, where our military judge is sworn in by a member of the highest court in the state of Louisiana,” said Col. John B. Dunlap, state judge advocate of the LANG.

Archey was appointed to the position of military judge by Maj. Gen. Glenn H. Curtis, adjutant general of the LANG, and was the first LANG judge advocate to attend the Military Judges’ Course at the Judge Advocate General’s Legal Center and School in Charlottesville, Virginia.

“Col. Archey has been a friend of mine for 20 years in the Louisiana National Guard … so I have a tremendous amount of respect for him,” commented Dunlap. “I think that Gen. Curtis’ choice in appointing him as the military judge was absolutely perfect for our organization.”

In 2008, Archey served as the Brigade Judge Advocate for the LANG’s 225th Engineer Brigade after being mobilized for a 12-month tour in support of Operation Iraqi Freedom.

“I look forward to applying everything I’ve learned and experienced to my decisions going forward,” said Archey. “I never thought that this would be a thing when I enlisted as an 18 year-old right out of high school.”

“You don’t get where you are without the help of those before you and those who you served with,” said Archey. “All of my JAG brothers and sisters that I’ve served with before and currently, I owe you a deep debt of gratitude.”