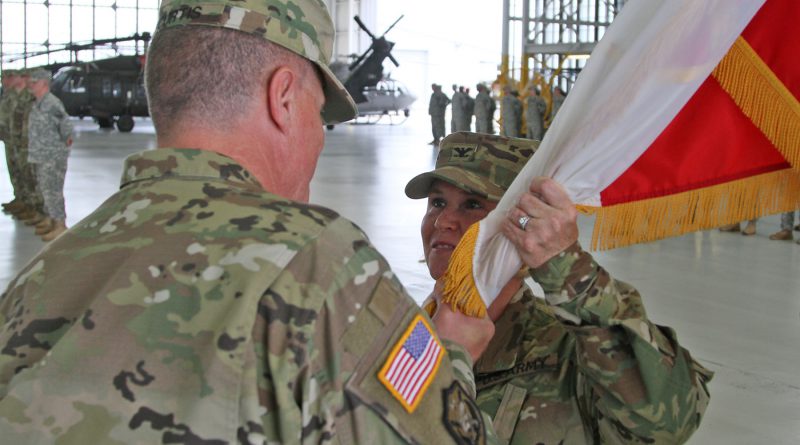 “Congratulations on your second DRU command,” Maj. Gen. Glenn H. Curtis, the adjutant general of the LANG, said to Haygood.

In his remarks to the audience, Curtis drew attention to her achievements as an officer in the LANG.

“She continues to plow new ground for us. In our history … she’s the first female to get a second DRU command,” said Curtis.

“I can’t think of a more significant honor than leading the brigade that I enlisted in as a private first class over 20 years ago,” said Haygood. “I am truly humbled.”

Haygood mobilized and served as the Battalion Executive Officer during Operation Iraqi Freedom in Multinational Division-Baghdad and for Hurricanes Katrina and Rita.

Haygood, lives with her husband Bill and their two daughters, Madeline and Lauren, in Gonzales.

Curtis presented Painting the Legion of Merit for his exceptional leadership while serving as the commander of the 225th for nearly four years.

“Congratulations on a successful command,” said Curtis to Painting. “You did a fabulous job. The Engineer Brigade, measured against the other engineer brigades throughout the Army National Guard, is one of the top units in the nation … a lot of it is because of leadership like Col. Painting provided and what Cindy will provide.”

“I want to personally thank my staff,” said Painting. “I want to thank you all for being here and doing what you do.”

Painting has served in various leadership roles during his tenure in the Guard. From his enlistment, he has served in practically every unit within the 205th and filled every position from platoon leader to battalion commander at some point during his career. While deployed to Kandahar (Aug. 2003-May 2004), Painting commanded a forward deployed detachment of the 205th who gave direct support to the First Brigade Combat Team of the 10th Mountain Division. He has also been mobilized for numerous other deployments, state emergencies and stateside and international engineering projects.

Painting and his wife, Monica, have three daughters, Thea, Brendan, and Kobi. They reside in Amite, La.

The 225th has a storied past. It has served in support of several campaigns and conflicts, which include the War of 1812, the Civil War, World Wars I and II, Operations Desert Shield, Desert
Storm, Iraqi Freedom and Enduring Freedom. The 225th has also provided disaster relief after floods, tornados and hurricanes and has provided assistance for community projects across the state.