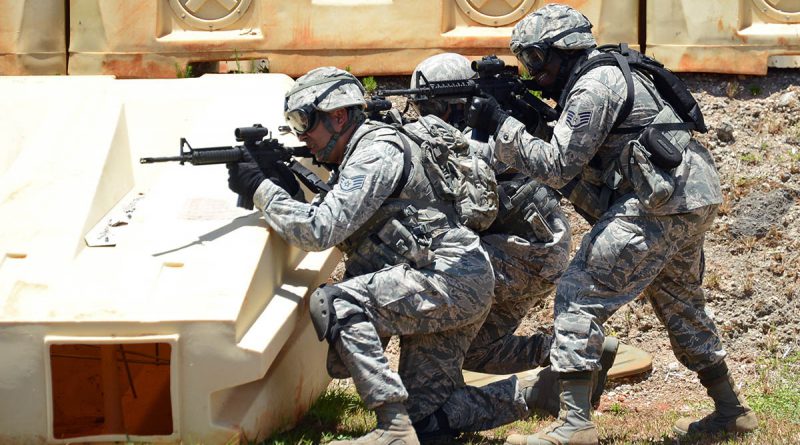 The training was designed to increase deployment readiness and promote integration of the two National Guard units.

Approximately 80 Airmen from the 159th, based in New Orleans, and the 150th SFS, based in Albuquerque, New Mexico, conducted the multiday training exercise with a focus on five key areas: land navigation, squad tactics, shooting fundamentals, defense tactics and military operation on urbanized terrain (MOUT).

“The training has exceeded our expectations,” said Capt. Kevin Keese, commander of the 159th SFS. “The months of planning and the integration of the squads has worked seamlessly and the Airmen have really grown from this training and learned from each other.”

The realistic training scenarios developed squad cohesion through individual and team tactics which emphasized communication and real world incident response. The exercise also allowed instructors from each unit to work together to enhance training materials and promote the interoperability of each squadron.

“Training with the Airmen from the 150th SFS I found out that we all work differently and have different ideas, but we all have to achieve the same goal,” said Senior Airman Tasmine Scott, 159th SFS. “Training in Guam takes us out of our element in Louisiana and provides the unit with great training like MOUT and squad tactic training in a remote location.”

“This training was like a family reunion for some of us,” said Capt. Christopher George, commander of the 150th SFS. “We deployed together to Kuwait in 2014, and this joint training exercise should be a template for other Air National Guard Security Forces Squadrons to follow in the future since we deploy together to remote regions around the world.”

The 736th SFS and the Commando Warrior, Pacific Regional Training Center, Andersen Air Force Base supported the exercise by providing facilities and support in Guam.