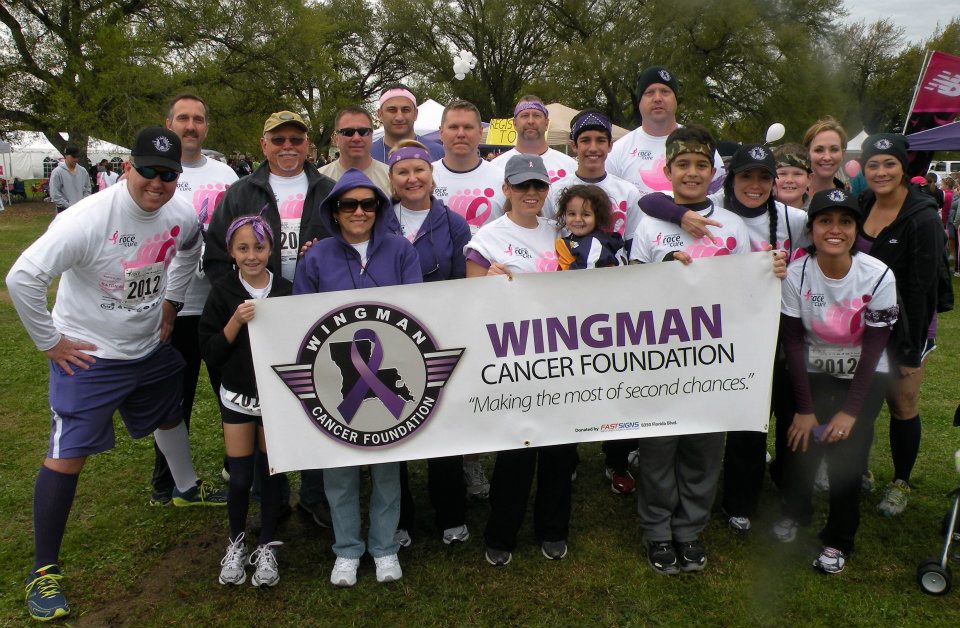 BATON ROUGE – Members of the Louisiana National Guard spent the day raising money and awareness for cancer research, honoring those who have lost their lives and advocating for fellow Guardsmen during the 16th annual Susan G. Komen Baton Rouge Race for the Cure followed by the Wingman Cancer Foundation’s benefit concert in Covington, March 10.

The non-profit Wingman Cancer Foundation was founded in 2010 by John and Crystal Larrieu, both Airmen in the Louisiana Air National Guard. The couple wanted to do something to help fellow Guardsmen after John overcame the odds of beating a testicular cancer diagnosis. With the assistance of fellow board members, comprised of Guardsmen and cancer survivors, they were able to raise sufficient funds and begin helping Guard families in 2011.

The fundraising conducted by members of the WCF team prior to the Race for the Cure, along with their participation in the 3.2-mile race, helped solidify their community involvement and allowed Guardsmen to contribute to an admirable cause.

“I have had family members who have battled cancer … I have been affected by it, and there is nothing worthier that I could have done today than to be here,” said Master Sgt. David A. Quintero, 159th Maintenance Group weapons loading supervisor. “This was a very moving experience.”

After the race-day activities, several team members headed to St. John’s Coffeehouse in Covington for the first WCF Benefit Concert.

The historic coffeehouse was packed as members and supporters filled the house to listen to the music of Alicia Calmes and a talented volunteer band as they debuted the “Wingman” song for the enthusiastic crowd. The song was written by a WCF board member about the feeling of helplessness that consumed her as she balanced her commitment to duty while battling a new type of opponent … cancer.

“Singing with a purpose is always so fulfilling,” said Calmes, a local music artist. “The Wingman Cancer Foundation is such a unique organization and has such a passion for what they are doing that I was just honored to be able to express their message through this performance.”

Several audience members were moved by the raw performance and Rob D. Rorie, Legacy Music LLC owner, agreed to have the Wingman song recorded in his studio and upload it as a benefit song for the WCF on iTunes.

“The Wingman Cancer Foundation is very near and dear to my heart as I have lost so many family and friends to cancer over the years,” said Joe Rotolo, Grand Knight fourth degree with the Knights of Columbus Assembly 1635, Slidell.  “This concert gave me an opportunity to enjoy some really good music and allowed me to hear about how the foundation is progressing.”

The WCF was able to raise over $1,800 in donations and t-shirts sales during the benefit concert, which will be used to continue assisting Louisiana Guard families who may face financial crisis or emotional turmoil due to a cancer diagnosis.

“We were amazed at the amount of support that we received from everyone,” said John Larrieu, WCF president, who was in awe of the success of their first benefit concert. “We are planning bigger and better things as we move forward and continue helping Louisiana Guard families.”

The Wingman Cancer Foundation is a 501(c)(3) non-profit that supports Louisiana Guardsmen that currently or have formerly battled cancer. Their primary focus is to provide emotional support to alleviate the unique challenges faced by service members and their families and/or care providers. Additionally, they provide financial assistance to military families affected by cancer to help them offset costs of physician visits, treatments, medications, lodging and transportation.