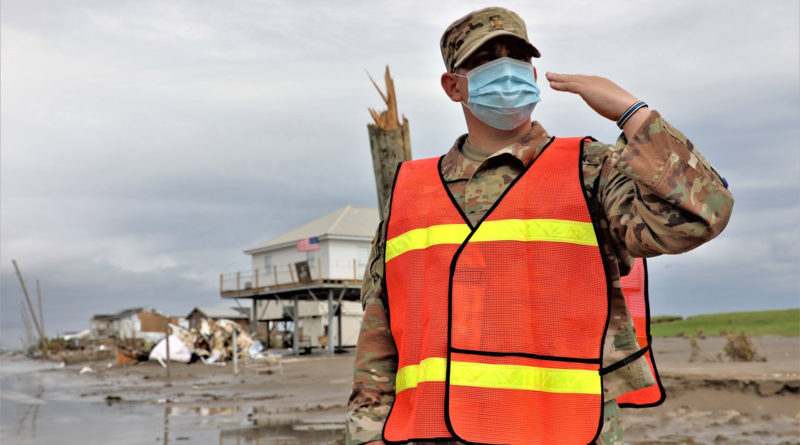 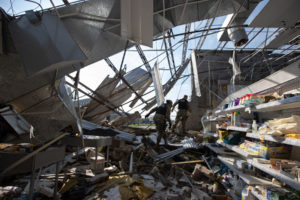 NEW ORLEANS – Every military service member understands that sacrifice and selfless service are part of the big picture before taking an oath to defend the U.S. After Hurricane Ida ripped through Louisiana Aug. 29, service members across the country packed their bags and laced up their boots to help Louisiana pick up the pieces the devastating storm left behind.

“I was actually sitting in my patrol car for the Columbia, South Carolina Police Department when I got the call to go to Louisiana. I was kind of expecting it. It was just a matter of when and where,” said 2nd Lt. Austin Riels, a Mississippi National Guardsman assigned to the 113th Military Police Company, 112th Military Police Battalion, headquartered in Brandon, Mississippi.

The National Guard units came together as a result of the Emergency Management Assistance Compact. EMAC is an 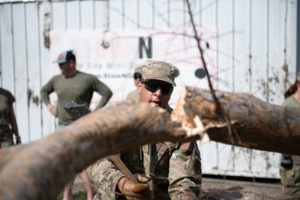 interstate mutual aid agreement that acts as a complement to the national disaster response system to provide timely and cost-effective assistance to impacted areas.

“We are grateful to all of the organizations that partnered with us and brought experienced teams of first responders from around the country to help us on our road to recovery after Hurricane Ida,” said Louisiana Gov. John Bel Edwards.

Disaster responses require meticulous planning, and the friendships between state coordinators go a long way toward forging the ties that bind state partners together. 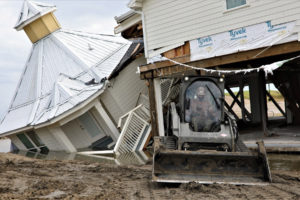 “We have hosted an annual All Hazards Coordination Workshop in New Orleans for as long as I’ve been in this organization,” said Lt. Col. Kevin Middleton, LANG deputy plans officer. “It’s to build those initial relationships between the planners and key individuals.”

After Hurricane Ida passed through the state, EMAC coordinators worked quickly to plan an effective response.

“We were looking at this emergency as it started shaping up and we started calling our neighbors that made agreements with us,” said Col. Rob Billings, LANG strategy plans and policy officer.

Due to circumstances beyond their control, the LANG simply did not have enough personnel on the ground to respond to such a widespread event. Fortunately, there was already a plan in place to account for those shortfalls.

“One of the biggest factors this year is that our infantry brigade combat team is deployed, so it increased our EMAC forecast 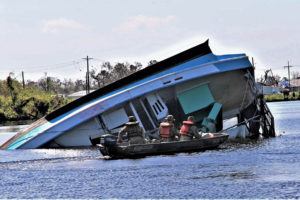 substantially,” said Maj. Mark Castillon, a LANG planning officer. “We have some pretty mature relationships with several states, so we already had some plans that were on the shelf, ready to execute.”

“The Louisiana National Guard had all hands on deck for the Hurricane Ida response,” said Brig. Gen. Thomas Friloux, LANG’s director of the joint staff and dual-status commander for Hurricane Ida relief. “The assisting states, territory and Title 10 partners brought their own operational experiences and assets to the response efforts giving us that much more capability to protect lives and property in Louisiana when it mattered most.” 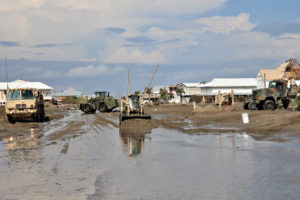 “Seeing all of these Soldiers volunteer to leave their full-time jobs and families to come down to Louisiana and help is incredible,” said Capt. Ebony Pugh, commander of the 1486th Transportation Company from Mansfield, Ohio. “I think it’s the most heroic thing I’ve seen in a long time.”

The troops on the ground all seemed to understand that they were, in essence, paying it forward.

“I know Louisiana has come to help us before, so I figured we’d come and return the favor,” said 1st Lt. Douglas Leverette, platoon leader, 1782nd Engineer Company from Lancaster, South Carolina.

Leverette is no stranger to working shoulder-to-shoulder with state and federal partners during hurricane response efforts.

“In Hurricane Florence, we were on our own coast doing HESCO barriers along the bridge, sandbags, aqua dams and all kinds of stuff,” he said. “It seems pretty similar to situations I’ve seen in South Carolina because we had active duty components and other states’ Guard units come in. We’re all engineers, so we speak the same language.”

As one day bleeds into the next, these activations can grind on the participating service members both physically and emotionally.

“Just being away from my kids and my wife is the hardest part. The kids are still pretty young so it’s hard for them to understand,” said Staff Sgt. Steven Warrick, 1486th Transportation Company from Mansfield, Ohio. “When it comes to longer times away like this, I know it’s hard for them because they’re always asking me when I’m coming home.”

When it comes to planning a response effort, a little foresight can make for an efficient, cost-effective strategy.

“Being able to forecast what we will need is important, because the turnaround time for requesting these forces is long, 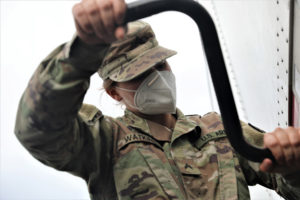 especially once you start to get several states away,” said Middleton. “You have to see where you’re going to be five to seven days from now, as conditions on the ground change quickly.”

Nevertheless, service members worked tirelessly to ease the catastrophic burden thrust upon Louisiana, and in many cases, greatly reduced the downtime involved in repairs of its infrastructure.

As the troops went about their initial reconstruction efforts, the affected citizens whose homes were damaged or destroyed by the storm were never far from their thoughts.

“When I first got here, it literally broke my heart to see all these houses in the floodwaters and just all the damage and everything,” said Sgt. Chris Bounds, from the Mississippi National Guard’s 113th Military Police Company. “I’m just happy that they called us, because Louisiana came out and helped Mississippi when we needed them. It warms my heart that we were able to come out and help them as much as we could.”

Presently, there are still service members on the ground continuing to assist the ongoing response. The success of these combined efforts lie in their collective strength, and they work with a relentless drive to assist the communities of Louisiana in reestablishing a sense of normalcy with minimal delay.

Although the road to recovery is a long one for the communities affected by Ida, the EMAC system has proven to be a necessary, beneficial first step in bringing aid and relief to any state affected by a natural disaster.

“We want to make sure that relationship [with other states] is solid because we may need them again in the future. We don’t want to mistreat our neighbors,” noted Billings.
“For us, it’s all about being a good neighbor to others.”