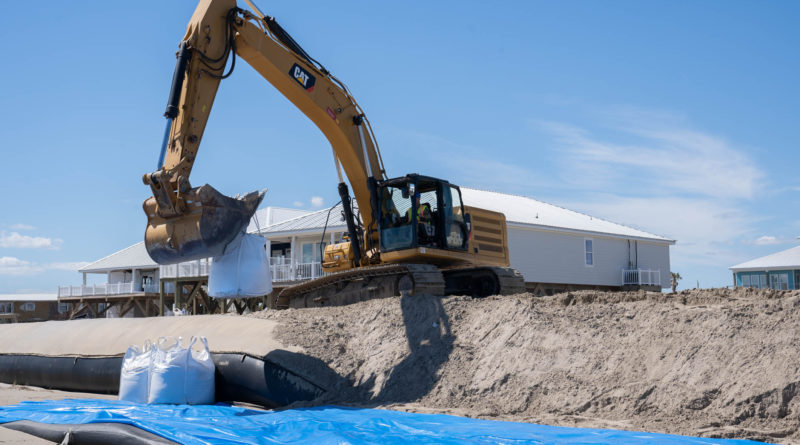 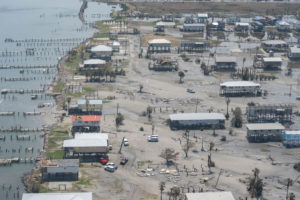 Grand Isle is Louisiana’s only inhabited barrier island, with a little more than 1,000 occupants. The people there are no strangers to the damaging effects of hurricanes. On average, the town is impacted by tropical storms and hurricanes every 2.68 years and is directly hit, on average, every 7.88 years.

Hurricane Ida’s eastern eye wall hit Grand Isle on August 29, the sixteenth anniversary of Hurricane Katrina. Every home on the island reported damage, and around 40-50% of those homes were completely destroyed.

Tidal surge pushed water over the island’s southern levee and breached it in a dozen locations, contributing to the catastrophic level of damage the island sustained.

In the wake of the destruction, the town council and mayor decided to close the island. 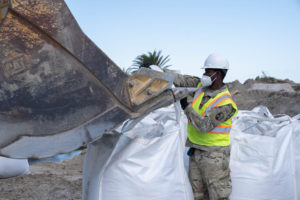 “The decision to close the island was a difficult one,” said Mayor David Camardelle, “but it is in everyone’s best interest.”

Grand Isle’s levee was built in 2010 by the U.S. Army Corps of Engineers. At a cost of $52 million, the levee is 7.7 miles long, 13 feet high and 80 feet wide. The levee contains 760,000 cubic yards of sand taken from the Gulf floor. The levee was previously damaged in several storms, most recently by Tropical Storm Cristobal and Hurricane Zeta in 2020.

The LANG’s 225th Engineer Brigade has been working non-stop to fill the breached areas in the levee by filling those gaps with large 3-by-3-foot sacks filled with up to 4,000 pounds of sand each. It’s a temporary fix that is meant to buy the people of Grand Isle more time to repair their island until hurricane season is over. 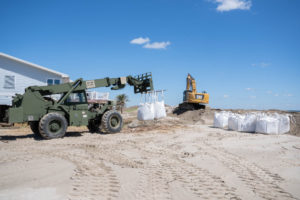 To date, the 225th has emplaced more than 1,100 sacks of sand, and they project placing around 400 more before finishing.

“If weather permits, we will complete [our mission] within the next couple of days,” said Col. Greg St. Romain, commander of the 225th.

The mayor of Grand Isle says the town is intent on rebuilding.

“As long as there is one grain of sand on Grand Isle, we are going to plant the American flag,” Carmardelle said. “We are not going anywhere.”