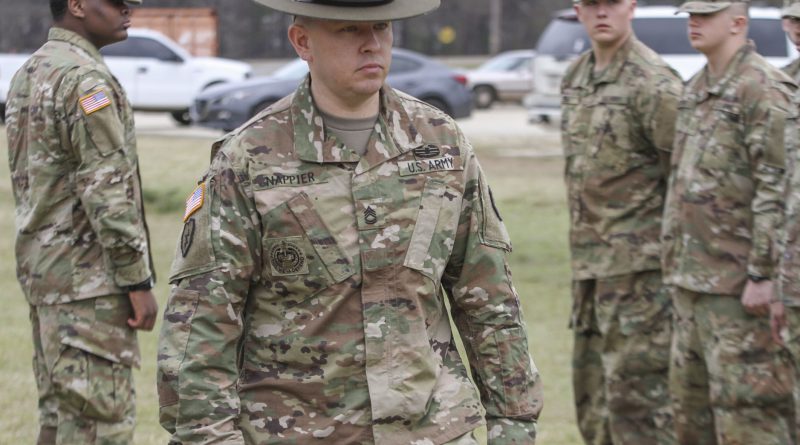 Nappier explained that one of the highest honors an NCO can achieve is a spot in the drill sergeant academy.

Drill sergeants are a symbol of excellence in initial entry training and experts in all warrior tasks and drills, living the Army core values, exemplifying the warrior ethos and most importantly holding themselves to the highest level of professionalism at all times. 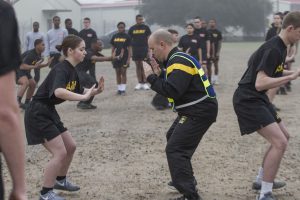 “I’m super proud of him for volunteering as he is the epitome of the Army values. He understands physically what it takes to do things like this, and his leadership style coupled with his determination and his willingness to complete the task drove him to success,” said Capt. Robert L. Bratton, commander of A Company, Recruiting and Retention.

This elite program is designed to push NCOs to their limits to allow them to hold the coveted title of drill sergeant. They train hard at the academy to ensure they are well prepared to mold civilians into soldiers.

“The most pivotal and significant moment for me at the academy was the final 12K ruck march that finished with the Rites of Passage, a ceremony in which we earned our badge and were first called drill sergeants,” said Nappier. “One of the most valuable lessons that I learned at the academy is that a drill sergeant isn’t just there to yell at the trainees, but to focus on mentoring the trainees by highlighting their strengths and helping them through their weaknesses in order to help them transition from citizen to soldier.”

The LANG’s Recruiting and Retention sent Nappier to the Drill Sergeant Academy to help improve the Recruit Sustainment Program (RSP) and better prepare the trainees for Basic Combat Training.

“You can really see the transition that Sgt. 1st Class Nappier has made in his teaching and training style from before he went to drill sergeant school,” said Command Sgt. Maj. Paul Baum. “He’s been a critical asset in rewriting our RSP Program. He has brought in a more professional way of teaching, which has helped to improve the graduation rate of our Basic Combat Training Soldiers.”

Since returning from school, Nappier has instructed trainees at two RSP drills and 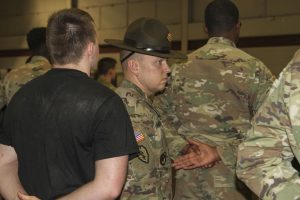 instructed a new course that educates recruiters on how to instruct soldiers.

“It was nice to have a drill sergeant here to make those on-the-spot corrections and mentor us,” said Pvt. Zander B. Baird, a senior at Claiborne Academy and a trainee at RSP in Shreveport. “He showed he cared while still holding us to the standard. He took the time to calm down Soldiers and make them feel less intimidated, which allowed them to become more focused.”

Nappier explained that these skills are required to better prepare trainees for BCT.

“I find it helpful to have a drill sergeant here before basic training,” said Pfc. Setavion D. Combs, a former RSP soldier now assigned to A Company, 3rd Battalion, 156th Infantry Regiment, 256th Infantry Brigade Combat Team. “He’s very hands on when instructing. Having the drill sergeant here will give the Soldiers a realistic experience of what to expect at BCT.”

“It means a great deal to Alpha Company as Drill Sergeant Nappier will be the first up-close glimpse at military discipline for the newly enlisted trainees. We are excited that Drill Sergeant Nappier will continue to lay the discipline foundation needed to start and finish basic training and advance individual training,” said 1st Sgt. Jeremy S. Roberts, A-company senior enlisted advisor.