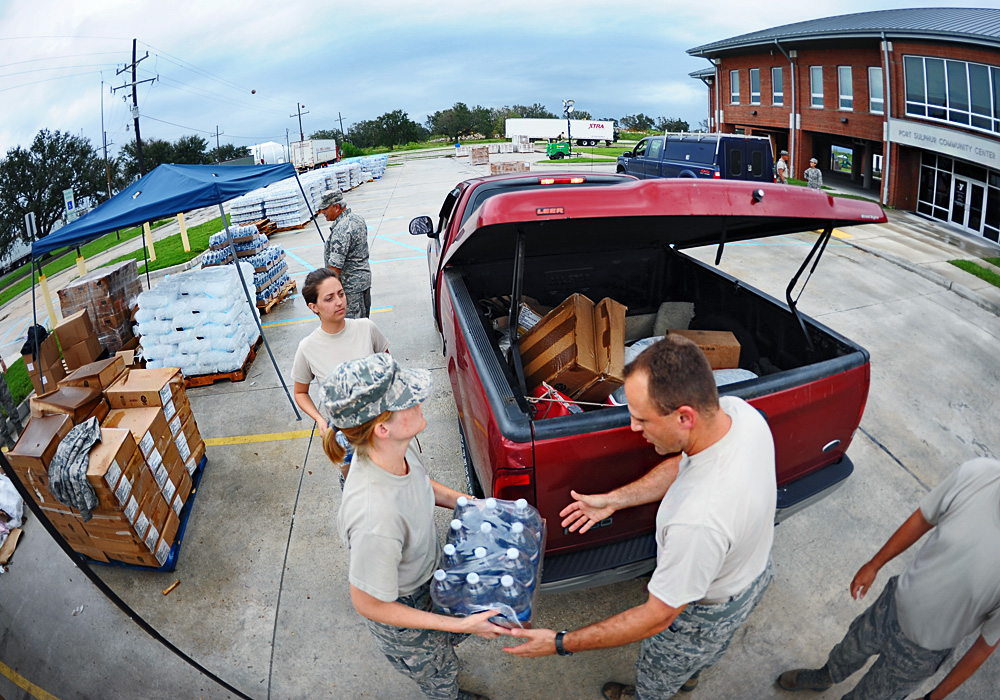 For many in the Air Guard, the mission sets were very different from their typical assignments of working directly with aircraft or air operations at the 159th Fighter Wing’s headquarters at Naval Air Station Joint Reserve Base New Orleans in Belle Chasse, La.

One challenge was delivering much needed fuel on Sept. 5 to the water treatment plant in Port Sulphur, a community devastated by Hurricane Isaac, and the other was to supply local residents with food, water, ice and tarps.

Staff Sgt. Brandon J. Gallagher, a 159th Aircraft Maintenance Squadron avionics specialist, was tasked with driving 300 gallons of fuel to Point Sulphur. Once there, an Army Guard UH-60 Black Hawk helicopter crew sling loaded it and placed it on top of a water treatment facility in order to power a generator that the Army Guard had flown in the day before.

“It was really cool to see this in person,” said Senior Airman Leah Crow, 159th Aircraft Maintenance Squadron avionics specialist, who helped deliver the fuel. “This has probably been the highlight of hurricane response for me because we are helping people in a devastated area get clean drinking water.”

Air Guardsmen took the lead on two additional missions, opening Points-of-Distribution sites in Port Sulphur, Sept. 5, and another in Boothville, Sept. 6. Airmen at these sites managed and supplied residents with water, ice, MREs and tarps.

“These residents have been so appreciative and considerate,” said Martin, explaining that many residents wanted no more than the minimum distribution to make sure their neighbors would have enough when they came through the line.

Gallagher, who had worked at several POD sites prior to delivering the fuel, summed up the sentiments of many of the Air Guardsmen working in Plaquemines Parish by saying it was an “honor” to serve the community regardless of what he was tasked to do.