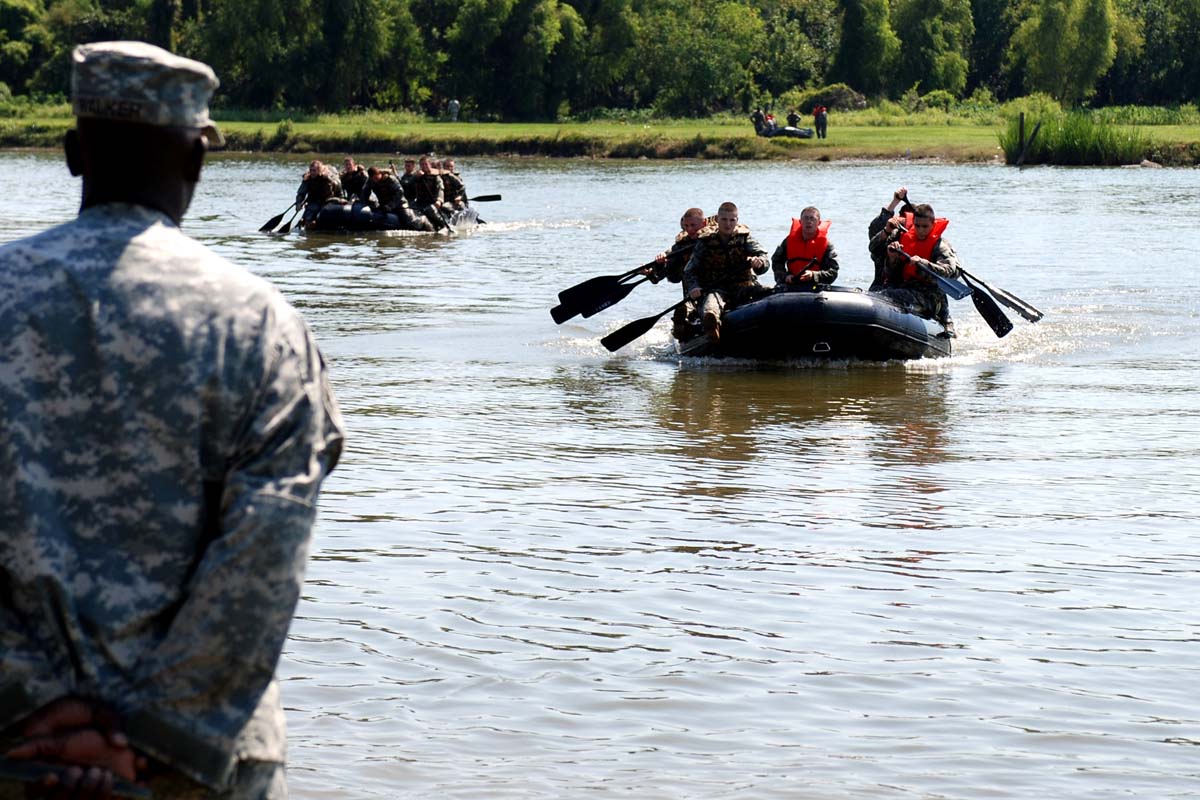 The cadets, representing Louisiana State, Southern, and Tulane Universities, intend to use this training in the upcoming Army ROTC Ranger Challenge competition, scheduled to take place in October in Fort Benning, Ga.

The overall mission was led by LSU ROTC Cadet Capt. Justin M. Bryson, who is also a Soldier with the 2225th.

“The purpose for this was to better prepare [the cadets] for the competition, and to maintain the proficiency of the instructors from the 2225th,” said Bryson. “And at the end of the day, put all the knowledge they’ve gained into a practical training exercise.”

The Ranger Challenge is an opportunity for schools to compete against each other through military tasks such as a written examination testing their Army knowledge, a ten kilometer road march and other physical fitness drills and field exercises.

Being a fairly new event in the Ranger Challenge competition, the Zodiac portion requires equipment that ROTC cadets do not have readily available to them.

Having assistance from the Guard has allowed the ROTC programs to receive in-depth training in this moderately foreign event.

“I know the 2225th would be more than happy to do training exercises like this with the cadets and I definitely look forward to doing this again,” said Bryson. “I’m just really happy to see that all the cadets took to the training and that it was beneficial for them.”

Bryson, a native of Springfield, is able to serve in the Guard while enrolled in ROTC through the Simultaneous Membership Program.

The SMP is a volunteer officer training program designed to increase the number of ROTC officers available for Reserve Forces Duty. It allows simultaneous enrollment and participation in the ROTC Advanced Course level of military instruction and enlistment in the Reserve Components.

“In ROTC, we learn the basic skills that officers use,” Bryson said. “Being in the Guard as well, allows me to put those skills to use on training missions like this.”

During the training, the cadets learned how to tactically maneuver with the Zodiacs using the high-carry and low-carry methods, how to tie various knots in order to secure the boats and equipment, the positions and proper commands of the boat, and how to proficiently capsize and reposition the boat in case of an emergency.

“I feel like the cadets really got a lot out of the training and our instructors were pretty clear and concise,” said Bryson. “They provided good, solid training that would help them with their competition.”

This is the second year in a row that the 2225th has provided training support to the ROTC by supplying Zodiacs for the cadets to train with.

In 2010, only one school participated in the training. With the addition of multiple schools, this training mission set itself apart from the year before.