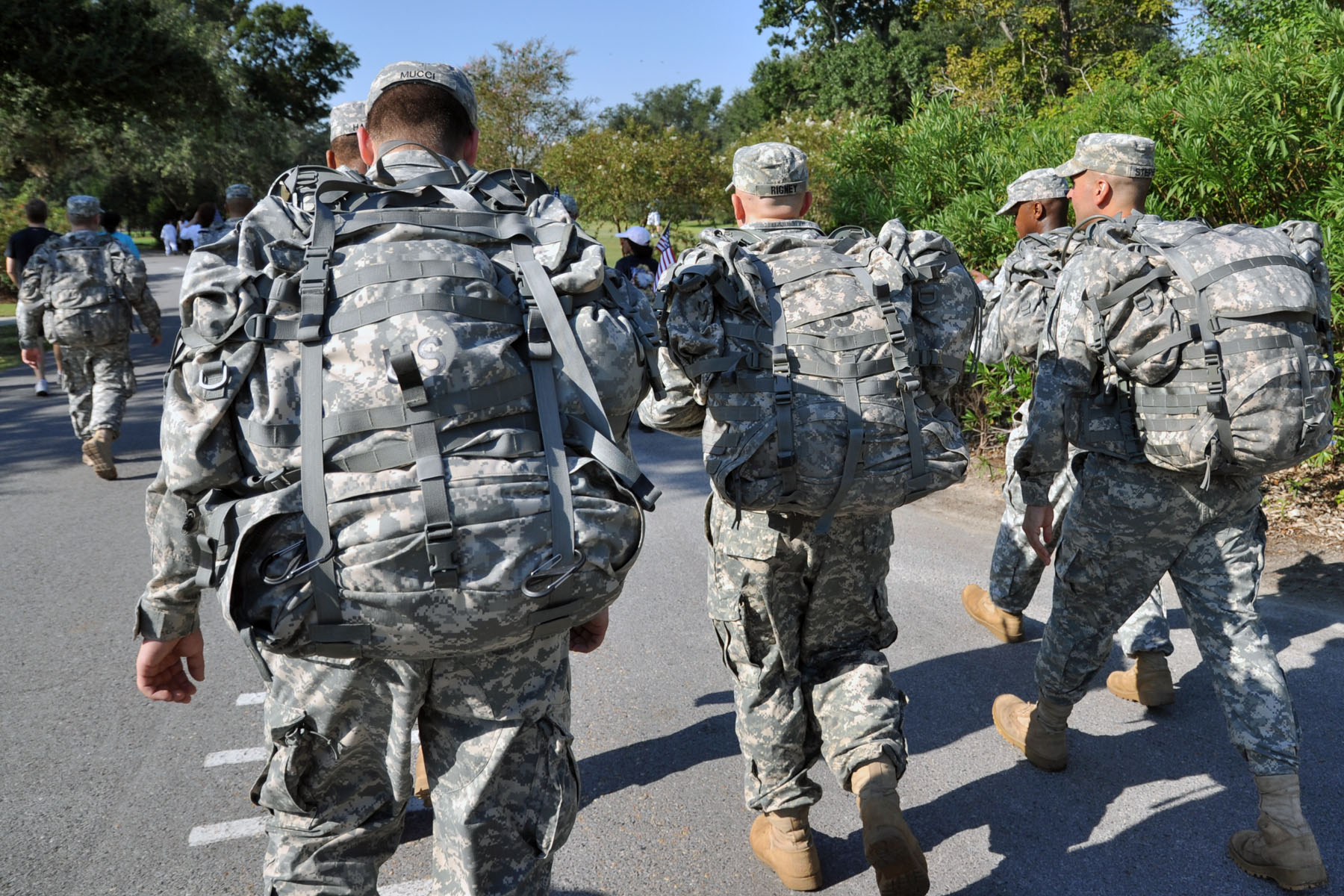 NEW ORLEANS – Soldiers with the Louisiana Army National Guard participated in the Louisiana Freedom Walk, Sept. 11, at Audubon Park in New Orleans to commemorate the 10th anniversary of 9/11.

The 1.9-mile trek around Audubon Park, sponsored by Operation Homefront Louisiana, raised awareness of the organization’s efforts to support veterans and service members.

Participating in the event were Soldiers from 1-141st Field Artillery Battalion as well as officer candidates from Officer Candidate School, Class 52.

“The whole gist behind the event is for the memory of 9/11 – to support our first responders, military and veterans. It’s almost like another memorial day,” said 1st Lt. Anthony La Nasa of Bravo Battery, 1-141st FA.

“It’s good to have everybody come out here to show that we support not only our nation, but our firefighters and police on a day like today,” said Fitzner.

The officer candidates each wore a 30-pound rucksack and took a second lap around the park after everyone else was done. The candidates, who are slated to graduate as second lieutenants in August 2012, saw the event as a bonding opportunity in addition to being a way to commemorate the 9/11 anniversary.

“It was good; I think it brought us all closer together. We found out more about each other than we did when we were at drill,” said Officer Candidate Patrick A. Stephen.

The event was organized by Tawney Tallo, the executive director of Operation Homefront Louisiana. Operation Homefront provides emergency financial and other assistance to the families of service members and wounded warriors. Examples of the services
they offer include donations of food, furniture and household goods; transitional housing for wounded warriors; and help with emergencies such as unexpected car and home repairs.

“I am so thankful, especially that the 141 came out. I think they kept the morale up,” said Tallo, referring to the marching cadences Soldiers from the Washington Artillery called throughout the walk.

Tallo is also an officer candidate in OCS. She was motivated to join the National Guard through a sense of personal duty.

Although a strong supporter of her husband, Louisiana National Guardsman Lt. Col. Vincent Tallo, Tawney felt she needed to do more.

“My dad raised us to not ever take our freedom for granted, and I just felt like I was never doing enough,” said Tallo.

1st Sgt. Bruce J. Jackson Sr. of the 1-141st Headquarters Battery said that 45 Soldiers from his unit volunteered to participate in the event. One of those Soldiers returned to military service after two decades as a result of the 9/11 attacks.

“After 20 years, I got back in to do what I can. I knew I wasn’t finished before. It brought back the patriotism, and brought me back into the military,” said Spc. Terrell J. Billiot of the 1-141 FA HHB.