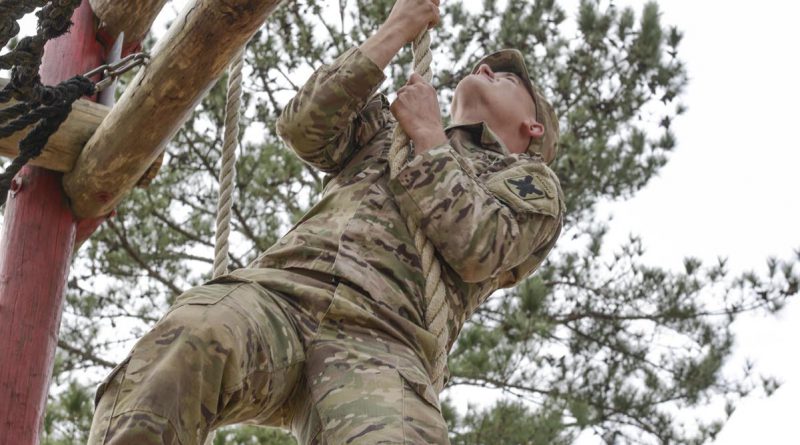 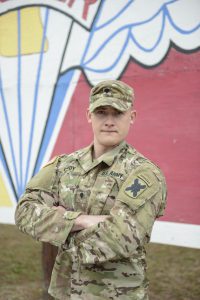 PINEVILLE, La. – “It’s exciting on one hand to be able to claim that I am the first junior enlisted in the Louisiana Guard to have done this, but at the same time surprising,” said Spc. William Gondy, an infantryman with A Company, 3rd Battalion, 156th Infantry Regiment, 256th Infantry Brigade Combat Team. “I’m not the epitome of Soldier fitness or mental ability. In my mind, this set the bar for other young guys who are here to hopefully go and accomplish the same.”

Gondy, a 23-year-old from Elverson, Pennsylvania, became the first junior enlisted Soldier in the Louisiana National Guard to complete both the Army Ranger and Airborne schools. He earned the coveted Ranger tab, Oct. 26, 2018, then graduated from Basic Airborne Course, Nov. 16, 2018.

The Army’s Ranger school, conducted at Fort Benning, Georgia, tests Soldiers on leadership and individual Soldier skills while pushing them past their physical and mental limits. The 61-day long course was originally created in 1952 to develop combat skills of selected officers and enlisted men.

“It is a great feeling to see the Ranger Tab pinned on graduates for the first time,” said Command Sgt. Maj. Clifford Ockman, CSM of the Louisiana Army National Guard. “Past graduates joke about having attended the last hard class, but the reality is very little has changed with the Ranger course since it started.” Ockman graduated Ranger School in 1991.

Gondy originally joined the Pennsylvania National Guard in 2014 at the age of 18, not long after his twin brother, Cpl. John Gondy, decided to join. He said he moved to Louisiana two years ago for a change of scenery from his home state.

“John made the push first to join. There’s a lot of competitive nature between us, and I saw it as a good opportunity to do what I always wanted to do,” said Gondy. 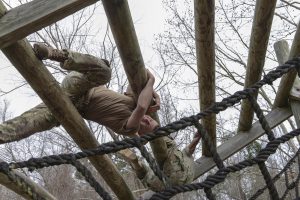 “Joining was a realization of those dreams we had as kids.”

“We set goals and expectations for each other without realizing it,” said Gondy. “That competitiveness is what made me want to go to Ranger school.”

1st Lt. Nicholas O’Bryan, Gondy’s commander, explained that the LANG receives a set number of slots to send Guardsmen to Ranger school, and those slots are divided amongst various units throughout the state.

“Once we were given the number of slots, we started with the physical aspect,” said O’Bryan. “We wanted to make sure that whoever we sent was reaching the bar or exceeding it to make sure that they would have every opportunity to succeed. We also looked at the type of Soldiers they are. We weighed these aspects against who we wanted to send to represent not only A Company, but 3rd Battalion as well.”

“Specialist Gondy gave me the opportunity to see a Soldier who cares about being a Soldier and doing the right thing,” said O’Bryan. “It showed in his work ethic.”

“With any physical training that I’ve ever done I try not to psych myself out,” said Gondy. “I didn’t research Ranger school one time before going. I went into it with my eyes open and expecting the worst, but knowing I was going to give 100 percent on everything handed to me.”

Although the course is extremely physically demanding, Gondy said that wasn’t the hardest part.

“It is at least 90 percent mental. The biggest challenge was knowing all of the expectations that were placed on me, which became a motivator for me during the school,” said Gondy. “The pressure of leadership was another facet. The last situation you want to manage guys in is when you’re hungry, tired, wet and cold. You pretty much have to keep an iron clamp on your mind when going through.”

One of the biggest draws to the Ranger course for Gondy was improving his leadership skills.

“I know that sounds pretty stereotypical, but the fact is I know at some point I’m getting promoted to sergeant,” he said. “I’ve never really been in a leadership position, and I knew I needed to arm myself with the tools to be able to tackle that situation.”

“Airborne school was almost like a vacation after Ranger school,” said Gondy. “I was first jumper three times, and it’s a thrill that is exciting and motivating. I’m glad I got the experience.”

The purpose of the BAC is to qualify the Soldier in the use of the parachute as a means of combat deployment and to develop leadership, self-confidence, and an 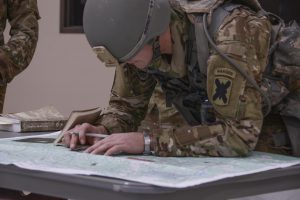 “That first jump is unbelievably scary. Everything in your mind and body is telling you not to jump out of a plane at 1,250 feet in the air,” said Gondy. “Your mind is asking why you would do that, but you just have to shut your mind off and go through the motions.”

O’Bryan said that even though Gondy’s rank hasn’t changed, his responsibilities and expectations of him have.

“I spoke with him before school and you could see a quiet trepidation there, but now he’s wanting to take on more responsibility,” said O’Bryan. “In the two days that he’s been back at drill with the unit, he’s doing things that I haven’t seen junior enlisted do before. He’s stepping into that leadership role, and you can see the quiet confidence he now has in himself.”

O’Bryan said that he and the unit are proud of Gondy for completing Ranger and Airborne school.

“You take someone and you get to see them as a young man who has grown into a Soldier who has excelled at one of the hardest military schools offered. It’s one of those things that solidifies why as an officer you want to be in company command,” said O’Bryan. “This will show the other junior enlisted that it doesn’t matter what rank you are, but that it’s about your work ethic and what you put into your career that will pay off in the end.”

Gondy said that for Soldiers wanting to attend Ranger school, the biggest hurdle is getting past the fear of going and failing.

“I had to swallow that fear and push past it,” said Gondy. “I would tell the young guys that you may fear this obstacle, but don’t let it stop you from going out and accomplishing your goal because it’s something that you can do.”

“He should be proud of his accomplishments and thankful for the support his family has given him,” said Ockman. “He can now share his newfound knowledge with his peers and encourage more Soldiers to take on the challenge.”
Since graduating Ranger and Airborne schools, Gondy represented 3rd Battalion in the 256th’s best warrior competition. Keeping in their competitive tradition, his brother is scheduled to begin Ranger school in August.