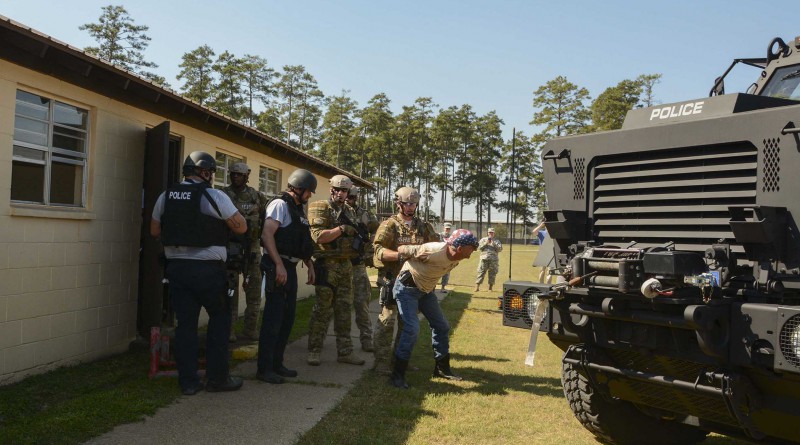 “It’s an annual Department of Defense mandated exercise that allows us to exercise our plan to make sure it’s solid. It allows us to work together as a team with other agencies and see what they can bring to the table,” said Lt. Col. Joseph Brocato, Camp Beauregard post commander. “It’s important that we work together with our local agencies to be prepared for this event. Every year, we improve on those relationships to where we work well together as a team and improve our response time.”

The exercise scenario was developed with the various agencies over several months to ensure the training was maximized for all the participants.

“It gives us a chance to see that it could actually happen on post and that we’re just as vulnerable as the outside community is,” said Sgt. Maj. Tommy Brouillette, the LANG’s senior safety advisor.

The multi-layered exercise involved the simulated detonation of a bomb that was in a vehicle at the front of the Joint Force Headquarters and active shooters firing upon first responders as they came onto scene. The scenario tested the skills of medical personnel as well as police and SWAT team strategy and investigation tactics.

“It gives us that cooperative endeavor where we’re able to work with local partners such as the National Guard, Sheriff’s office, and the state police,” said Chief Deputy Darrell Basco, Pineville Police Department. “If we actually had an event, these are not only training partners, but these are the actual participants if something did happen.”

“It was very beneficial for the post and the National Guard because it gives us a working knowledge of who is doing what, when, where and how so nobody is confused in the event that it actually happens,” said Brouillette. “The outcome was terrific; they did what they had to do.”