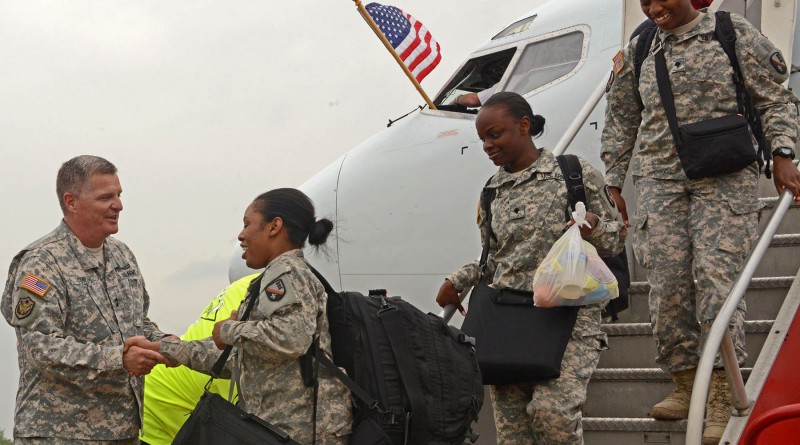 NEW ORLEANS – The Louisiana National Guard ended the fiscal year with an impressive jump into the number four spot among all other states’ National Guards in overall strength of its force. The Army Guard also claimed the number one ranking in retention mission for the year.

Three years ago the LANG began a turn around after coming in at 38th in the nation at the end of September 2012 with 98.4 percent strength. In 2013, the LANG move up to 20th and last year ranked 15th.

“The Louisiana National Guard’s mission is to respond if our communities, state or federal government call on us,” said Maj. Gen. Glenn H. Curtis, the adjutant general of the LANG. “The overall-strength of the Louisiana Guard is a critical piece to the state’s All-Hazard response plan. A ranking of this level is a testament to the hard work of our Guardsmen and the value we place on each member of our organization. If our state or country call on us, we are ready.”

“It’s been an amazing experience to watch the Louisiana National Guard grow over the last three years,” said Col. Kenneth Donnelly, commander of the Recruiting and Retention Command. “Today’s Louisiana National Guard members are of the highest quality and they are motivated by the expectation that they will be deployed in service to their state and country. It’s great to see patriotism as the main reason people want to join an all-volunteer force.”

According to Donnelly, a significant role in the success of the Guard’s strength comes from the support of the state, and will help with difficult times ahead due to sequestration.

The Air Guard has also increased its overall strength over the last four years and exceeded its retention mission as well.

“The Louisiana Air National Guard has climbed from 100 percent strength in 2012 to ending fiscal year 2015 at 107 percent,” said Brig. Gen. Charles Chappuis, assistant adjutant general – Air. “I could not be more proud of each member of the Air Guard and all we have accomplished. We are excited about the future and look forward to our continued success as one of the top organizations in the nation.”