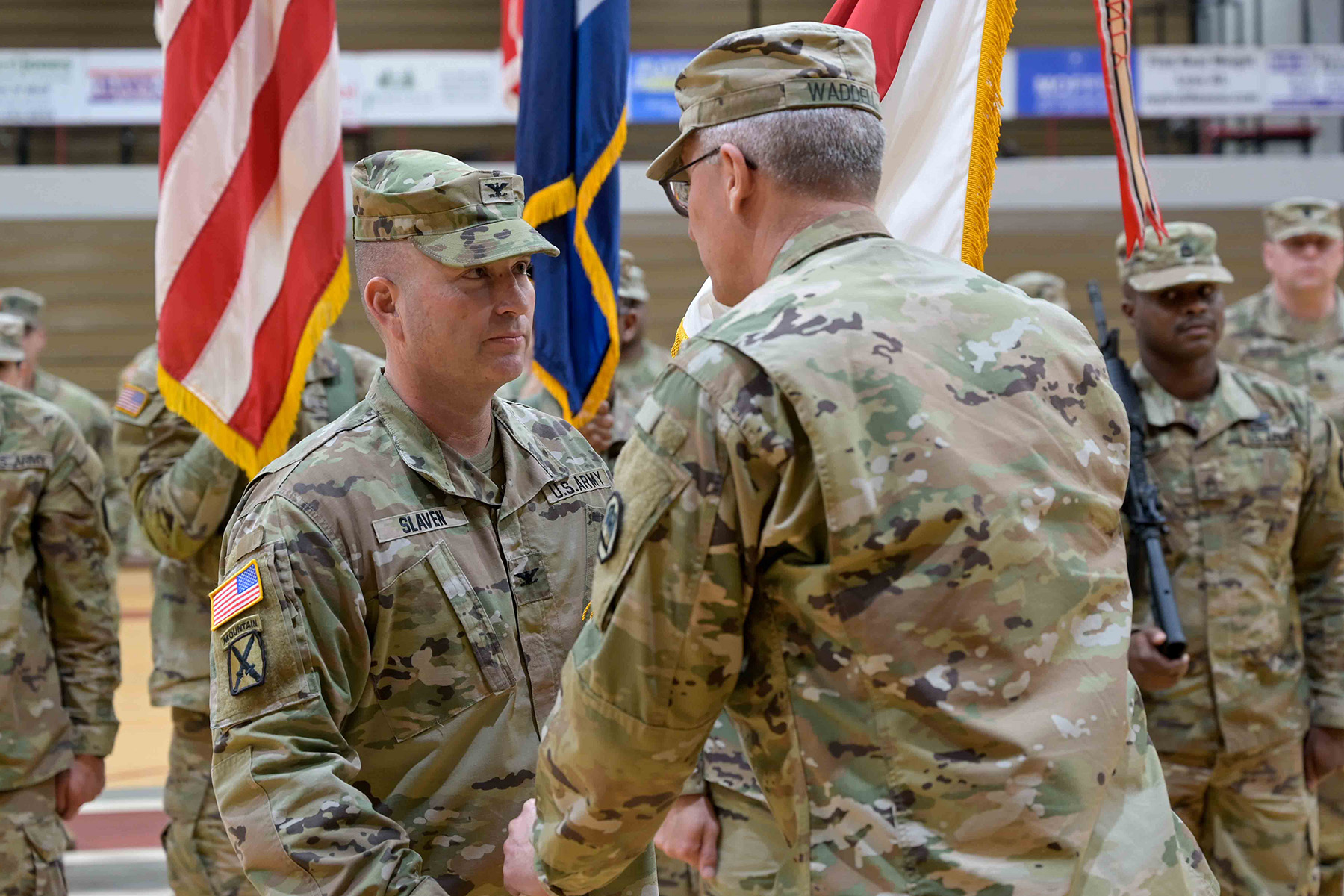 “As we do this transfer of leadership, it’s a historic day for the engineer brigade,” said Maj. Gen. Keith Waddell, adjutant general of the LANG. “These events happen periodically and when they do, it’s a significant event for our organization. I couldn’t be happier for the two individuals we are going to recognize today.”

In addition to his new role as a brigade commander, Slaven works full-time as the LANG’s director of the Construction and Facilities 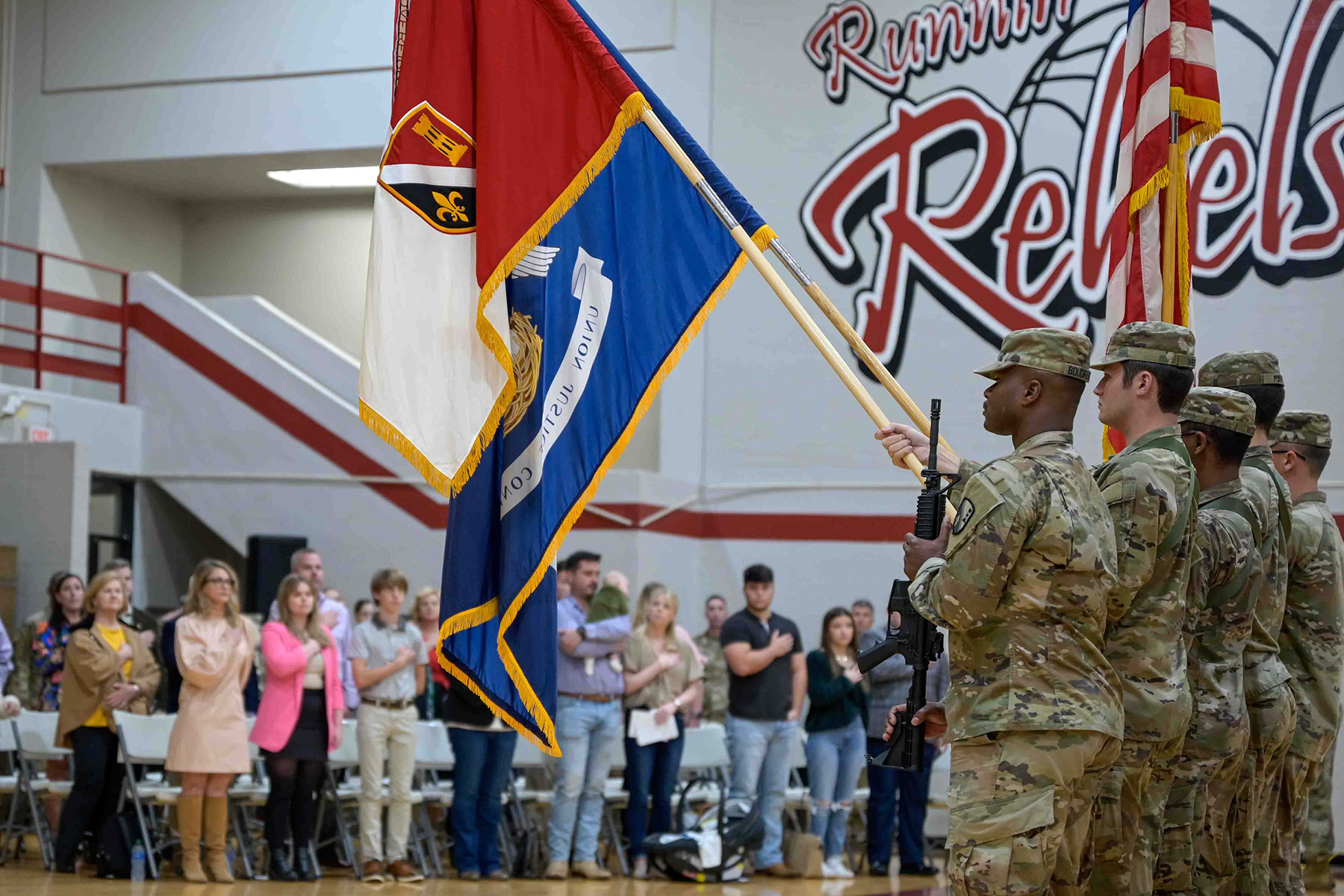 Management Office. He holds a bachelor’s degree from Louisiana State University and a master’s degree in Strategic Studies from the U.S. Army War College.

A 33-year veteran of the LANG, Slaven originally enlisted in B Company, 205th Engineer Battalion in 1990. He received his commission from the LANG Officer Candidate School in 1998.

“Thank you for having the trust and confidence in me to lead the Castle Brigade,” said Slaven. “It is truly an honor and privilege, and I fully accept the responsibilities and duties that come with the position to lead, motivate, care and to ensure Team Castle has the highest level of readiness possible to accomplish our missions when our nation and our state call upon us.  I will give you and the members of this brigade my best.”

Slaven has served in a variety of command and staff positions within the 225th enroute to becoming the brigade commander. He deployed to the Middle East as commander of the 205th Engineer Battalion and again as the 225th’s executive officer. Stateside, he has served as the 205th’s civil engineer, plans officer, and operations officer.

“Colonel Slaven is no stranger to the engineer brigade. He’s been highly successful in every assignment and certainly earned this opportunity,” said Waddell. “I congratulate you on taking command of the Castle Brigade, the world’s best engineering brigade. I know you will take them to the next level in their journey.”

Waddell specifically highlighted Slaven’s recent assignment as the deputy commander of Task Force COVID. “That was a long journey with General [Cindy] Haygood and her team, but the response and everything that y’all did during unprecedented times… you knocked it out of the park.” 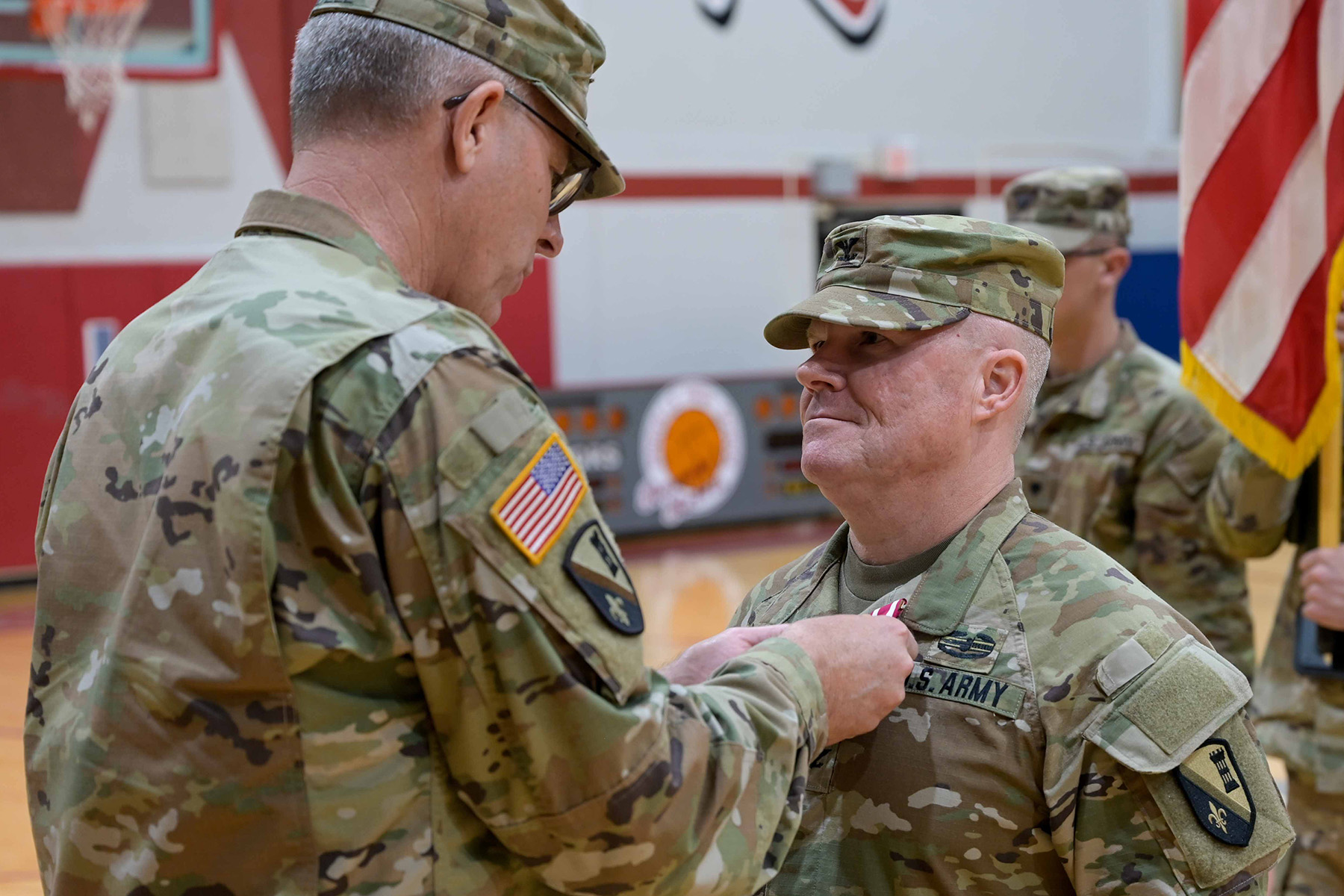 St. Romain received his commission from the LANG’s Officer Candidate School in 1998. He holds a Bachelor of Science in Horticulture from Louisiana State University and a Master’s Degree in Strategic Studies from the U.S. Army War College. He will continue his career in the LANG as the Joint Director of Military Support at the Governor’s Office of Homeland Security in Baton Rouge.

Over the course of his career, St. Romain held several key positions within the brigade. He deployed to the Middle East twice as a commander; once with B Company, 1088th Engineer Battalion and again with the 528th Engineer Battalion. He also served as the 225th’s rear detachment commander during their last deployment, when the Castle Brigade was simultaneously conducting overseas operations and several stateside emergency responses.

“Thank you for an incredible job as the commander of the 225th Engineer Brigade,” said Waddell. “He took over as the brigade commander in May 2020, after we started our COVID response … along the way, when we were already in the mix of a serious emergency, he also dealt with multiple tornado responses, [hurricanes] Laura, Delta, Zeta and Ida, the winter freeze event in the Shreveport-Bossier area and some flooding events … you get the idea, we had a lot going on. In terms of a team lead, he did a phenomenal job.”

“I consider myself an extremely lucky person to be part of what I call a winning team, and that is the Castle Brigade,” said St. Romain. “I look back and reflect on the accomplishments of the unit at all levels, realizing how extremely rewarding it has been to watch the growth of so many of you within the units. It’s been one of the most fulfilling jobs that I’ve ever had.”