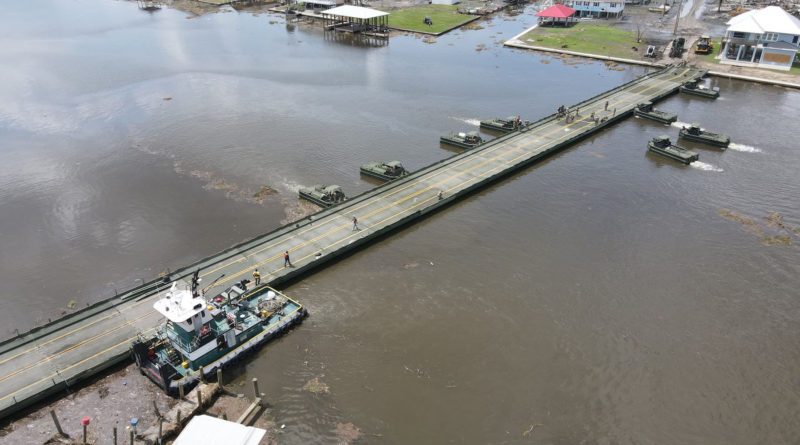 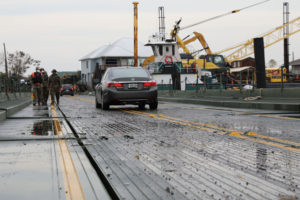 Citizen Soldiers and Airmen who make up the ranks of the Louisiana National Guard have a personal stake in recovery operations after a natural disaster strikes. They live and work in the communities they support. They are prepared to stand up at a moment’s notice to protect lives and property, maintain communications and ensure the continuity of government in the places they call home.

To prepare for Ida, the LANG activated 100% of their available Guardsmen and staged high-water vehicles, rescue boats and helicopters to support local and state agencies in search and rescue missions, commodities distribution and route clearance.

“When a storm has passed, we need to get on the ground immediately to assess and clear routes for emergency access and for power companies to start working,” said Col. Greg St. Romain, a resident of St. Francisville, La., and commander of the 225th. “We’re doing everything from route clearance to debris clean up.”

Ida created many challenging circumstances for the engineers from extensively damaged electrical equipment, flooding, downed trees and power lines to a bridge that was rendered unusable by storm 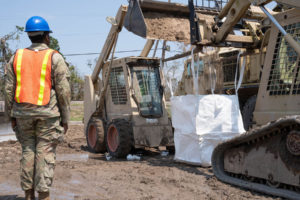 “Working in the 225th during Hurricane Ida recovery has been quite the experience, especially after coming off of a deployment,” said Spc. Javacia Blunt, a resident of Winnsboro, La. “It was an awesome experience to be able to work with the local officials to assist them on the road to recovery. Protecting what matters is what matters to me most.”

According to the Entergy Corporation, one of the region’s largest electric power suppliers, Ida took out more poles than hurricanes Katrina, Ike, Delta and Laura combined, and left more than one million homes and businesses in Louisiana and Mississippi without power.

In order for contractors, emergency services, military and local citizens to reach the affected areas safely for continued recovery efforts, the engineer brigade cleared more than 2,900 miles of road from mud, trees and debris and more than 50,000 cubic yards of debris from municipal buildings.

“Getting to see the Soldiers do their jobs and for it to be impactful has gone from something that we’re doing to something with an actual purpose in mind,” said Capt. Kyle Schmidt, a resident of Baton Rouge, La. and commander of the 2225th Multi-Role Bridge Company (MRBC), a unique unit under the 225th. “To see that difference in motivation and to see that end goal get accomplished is really something quite impressive.” 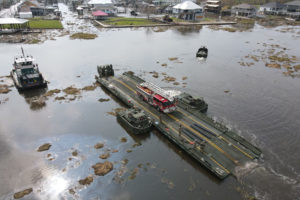 The MRBC, based in Marrero and Slidell, is trained to deploy the Improved Ribbon Bridge (IRB), a portable, floating bridge used for military convoys to cross waterways. The 2225th has found ways to implement the IRB during emergency response operations dating back to the Deepwater Horizon oil spill in 2010. Currently, the bridge company is using the IRB to temporarily replace the only bridge that connects to the Barataria community in Jean Lafitte, La. that was taken out when two shrimp boats collided with it during the storm.

“With the main bridge out in Lafitte, we have an isolated community of 400 people with no access to emergency services,” said Schmidt. “It was the beginning of a bad situation, and it became critical to be able to get emergency services over to the other side.”

Before the temporary bridge was complete, the MRBC used sections of the IRB to ferry emergency response vehicles across the waterway. To date more than 10,000 vehicles have used the bridge.

“It’s hugely impactful. We’ve talked to some who have been so thankful because they didn’t know how they were going to get to their homes. It’s been told to me that, ‘It’s a godsend that we’re here’ and that’s how we look at it,” said 1st Sgt. Johnny Hagan, a resident of Pineville, La. “All the sweat, hot days, long days; it’s all worth it knowing that this community can get back to their homes and continue trying to rebuild their lives.”

Staff Sgt. Jose Flores, the 2225th’s supply sergeant, has been in the MRBC since 2010 and has supported every emergency response mission since then, including the Deepwater Horizon oil spill, flooding 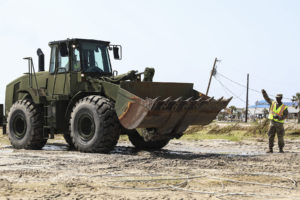 throughout the state in 2016, hurricanes Laura, Delta, and Zeta last year and now Ida. He’s seen first-hand how the unit has used their ingenuity to implement the IRB and bridge erection boats to support Louisiana communities when they need it most.

“We always stay ahead of the game and train by performing disaster response exercises annually with the local officials to stay prepared,” said Flores, a resident of Marrero, La. “In addition to our main mission of building bridges, we’ve found that our boats are extremely effective for search and rescue in areas where the current is too strong for smaller boats to navigate.”

“We’re very dynamic. We’ve become versatile, and we are adaptable to any mission that comes our way,” said St. Romain. “I can’t be more proud of the Soldiers within Task Force Castle and how they’re operating. They continue to accomplish any mission and any task that comes their way.”