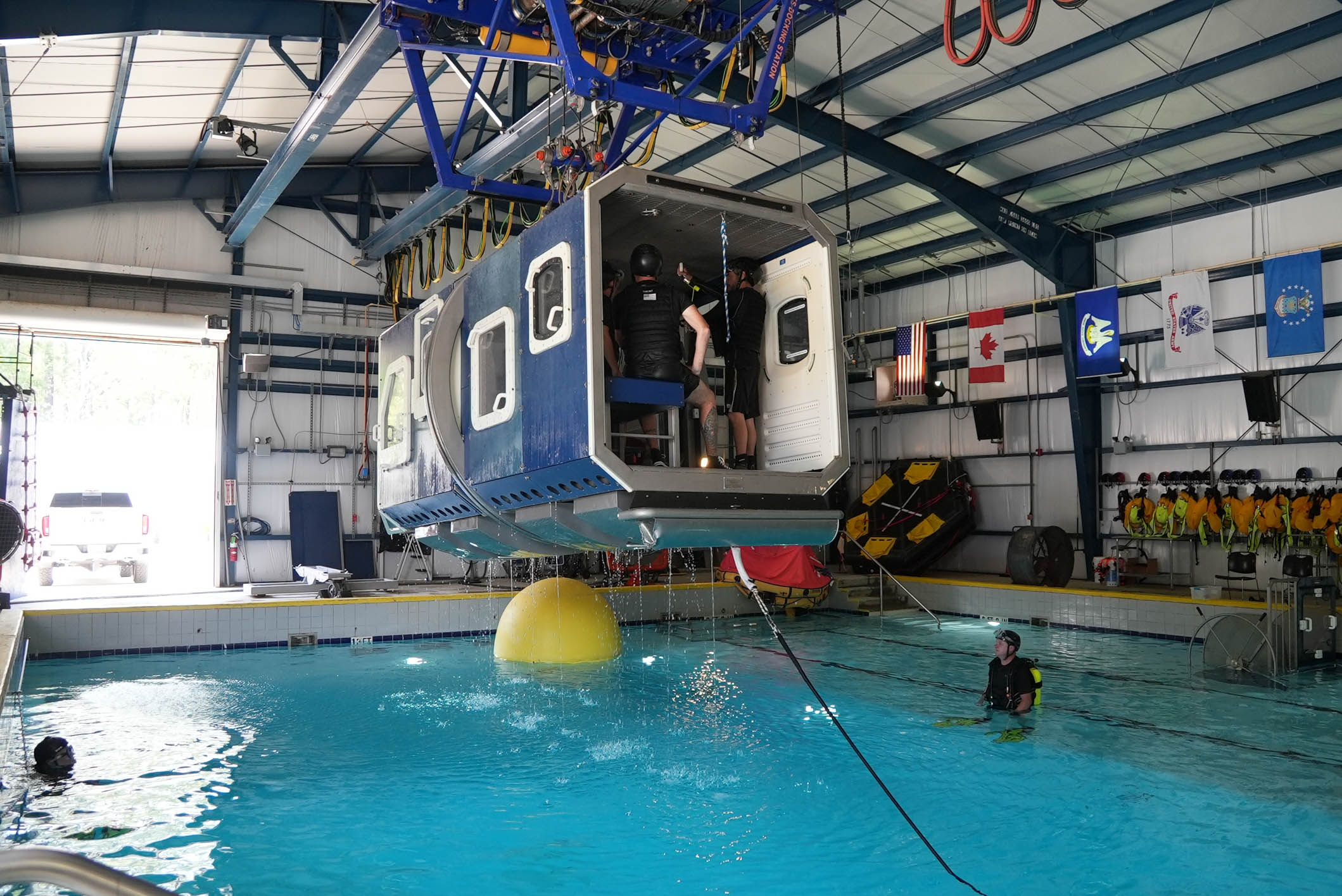 NEW ORLEANS – Louisiana National Guard aircrew members participated in an eight-hour helicopter over-water survival training course at the Robert Training Center in Robert, Louisiana, June 24. This training is delivered by subject matter experts with Maersk Training. These instructors come from a military/aviation background themselves and can relate. The training provides critical life-saving skills in the event of a helicopter ditches in water. 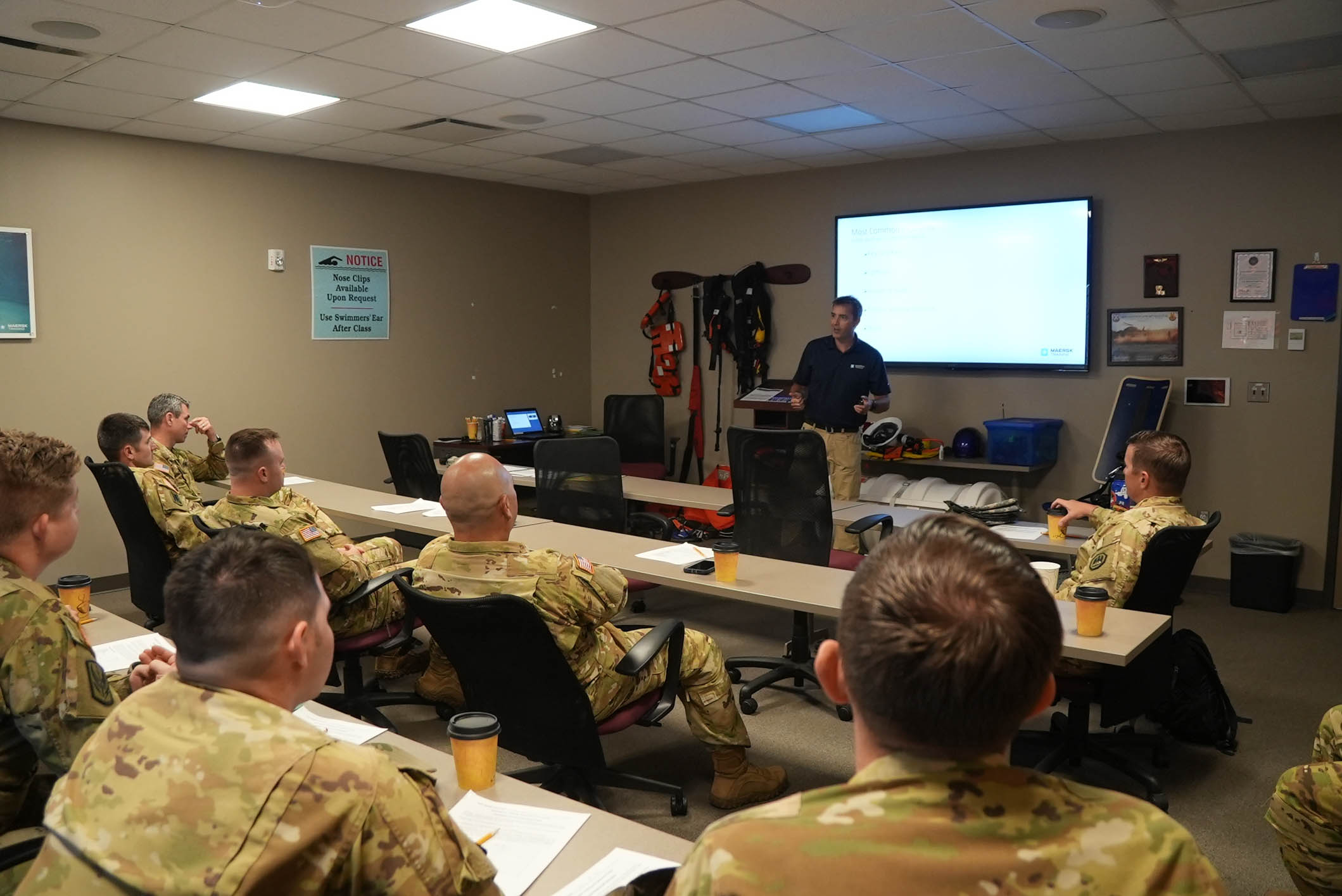 The 12 aircrew members sat through four hours of lecture before spending another four hours training underwater in a modular egress training simulator designed to replicate the interior of a Black Hawk or Lakota helicopter.

The aircrew members were taught the steps they need to follow upon entry to the water: how to orient themselves, how to disconnect their seatbelt, how to release the door, how to set up their emergency breathing system and find an escape from the helicopter.

“The Aircrew members chance for survival when underwater in a ditched helicopter significantly increases if they have completed this high fidelity egress training,” said Dylan Sanchez, the Maersk Training -Learning Manager at the Robert Training Center. 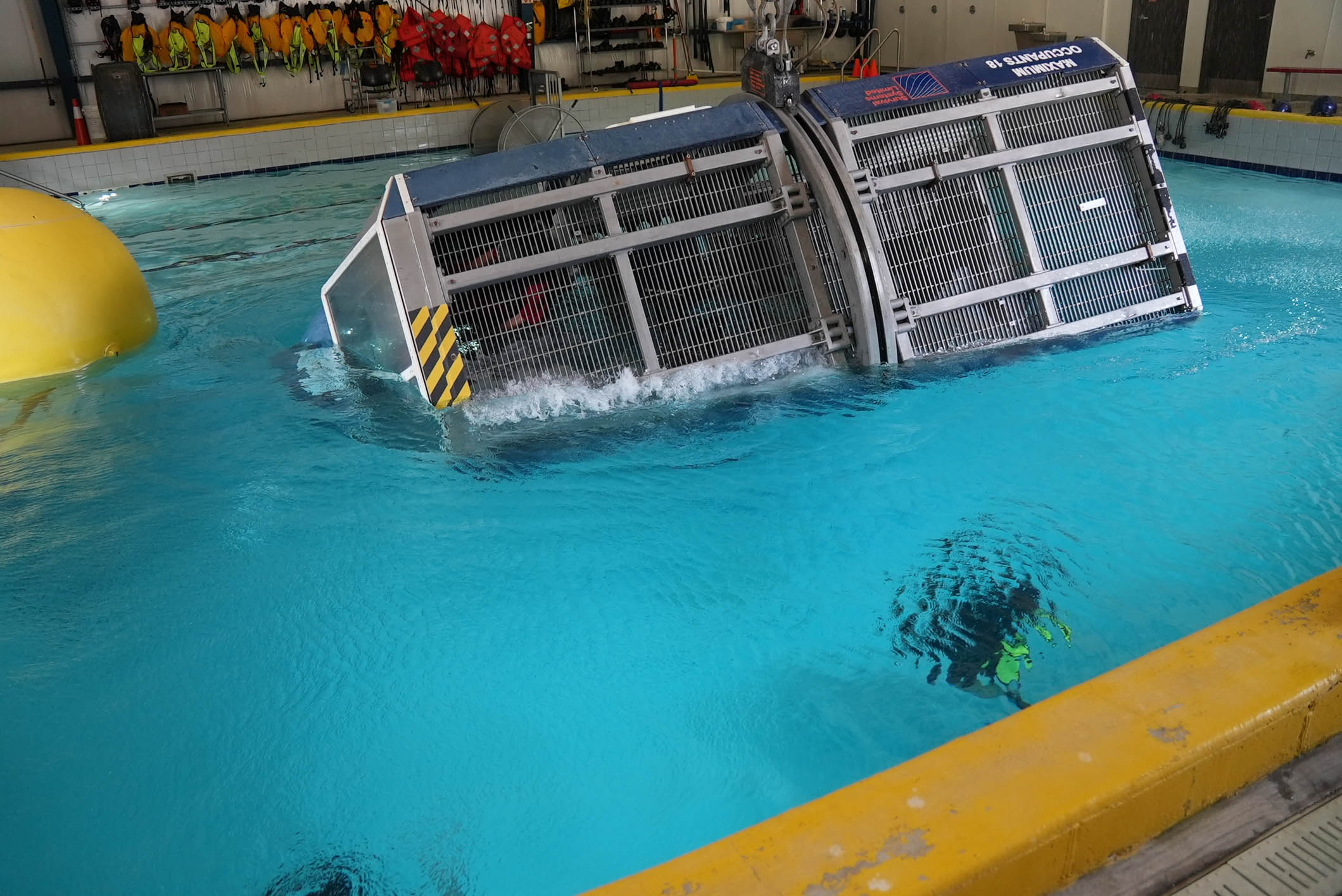 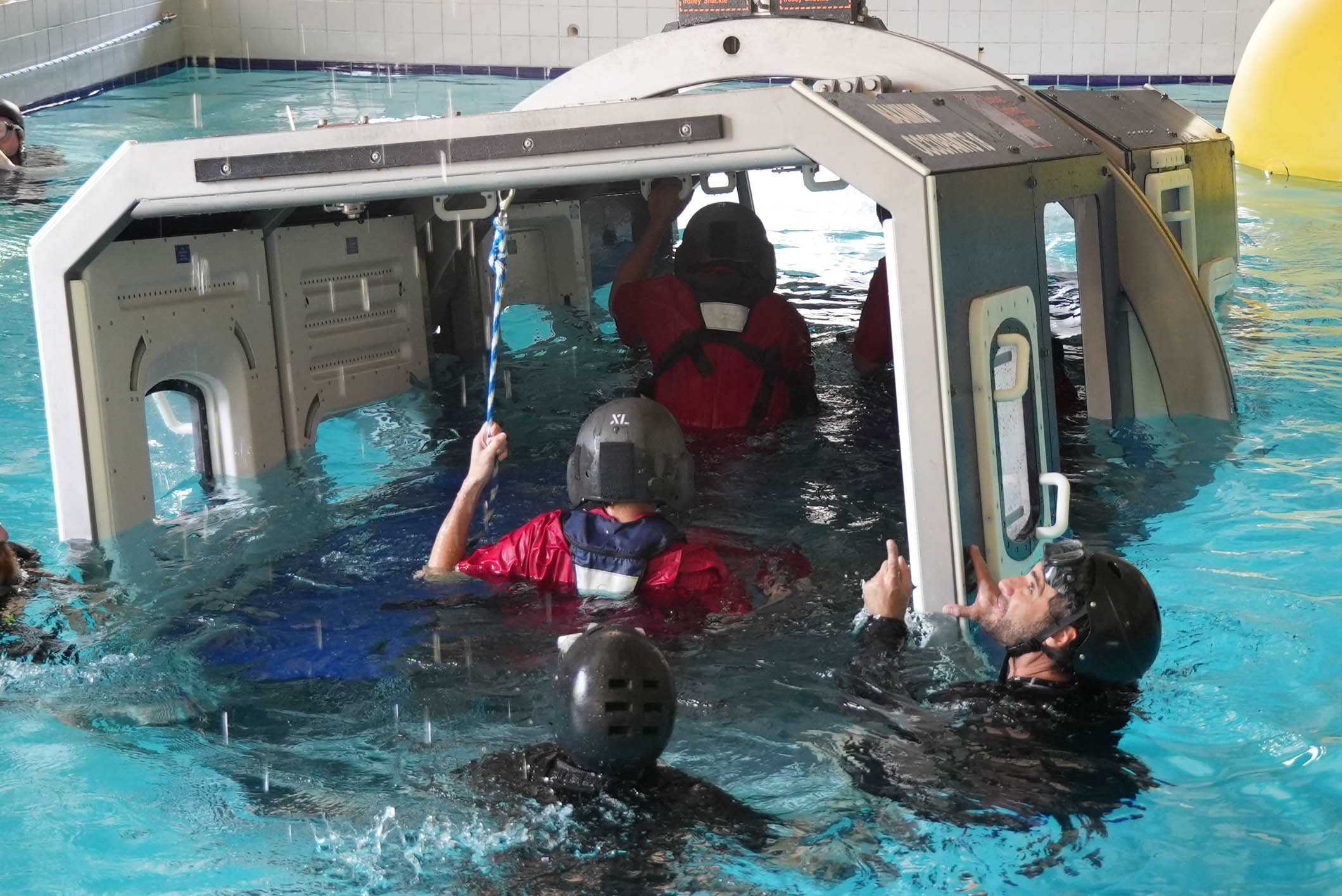 inside a pool. The simulator was lowered into the water and as contact was made, the simulator rolled upside down to emulate how a top-heavy helicopter would flip over during a real-life crash in water. Once the simulator is submerged, aircrew members practice escaping the simulator.

Sanchez says the training is invaluable, because in a real-life situation aircrew members can’t afford to figure out their survival on the spot. “It’s extremely stressful, it’s very fast … from the moment the aircraft loses control until you hit the water. Remembering these steps are key and the difference between life and death.”

The aircrew members went through six different scenarios, each one getting progressively 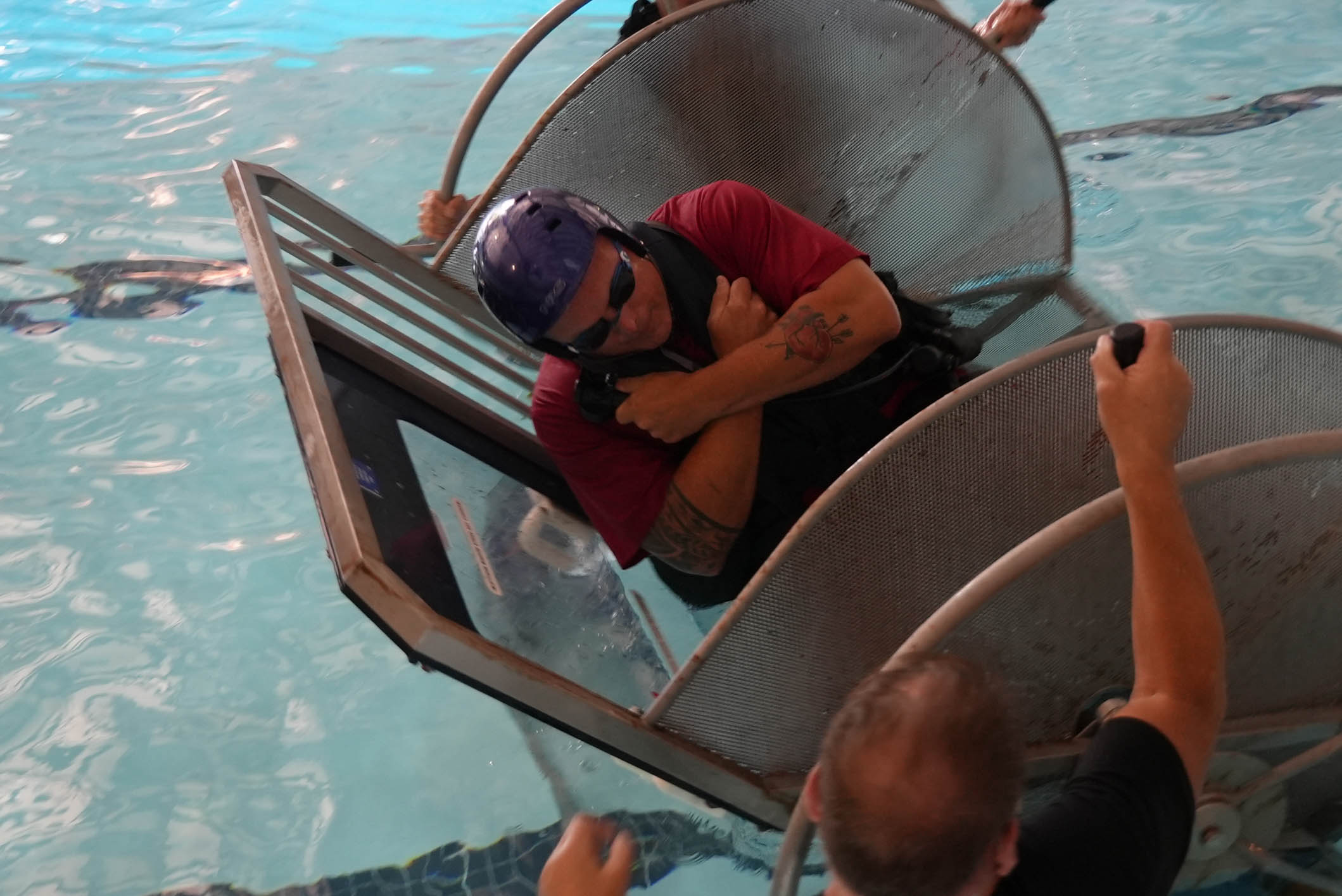 harder than the last. In one scenario, aircrew members simulated having a patient they needed to rescue; in another they had no emergency breathing system. The most difficult scenario saw aircrew members having to escape the simulator in pitch black with no light to simulate a crash at night.

Spc. Timothy Lloyd with the 1-244th Assault Helicopter Battalion said the training was good for him to learn. “It gives you a sense of confidence to operate under certain conditions. Without the training, you’d be more nervous or hesitant to go into a high-risk mission.”