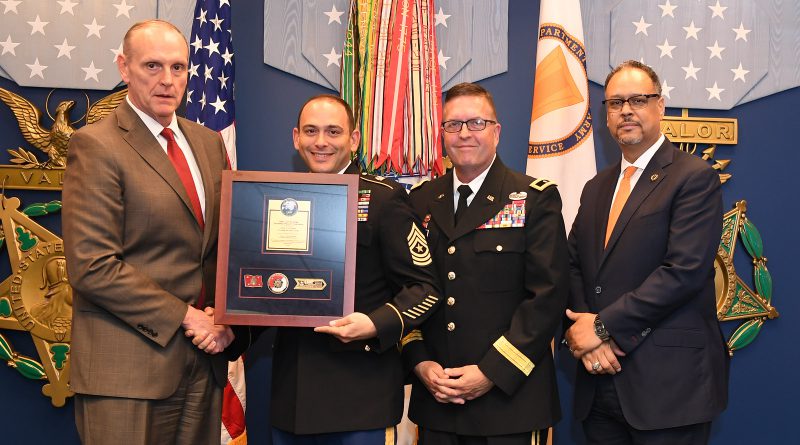 “We won this award by identifying areas in the organization that could be made more efficient and redirecting those resources towards processes that generate readiness,” said Mula. “Our original goal was to reduce man-hours and travel expenditures thirty percent. We actually achieved a reduction of man-hours by forty-one percent and travel costs by seventy-one percent. This equated to annual labor savings of $366,000 and travel of $45,000,” which over a six-year period is $2,200,000 and $280,000 respectively.”

Mula said the award was important to him because it highlighted the efforts and the capability of the LANG and the National Guard as whole.

“We were the only National Guard that won an award. The other winners were major Army commands such as the Corp of Engineers, U.S. Army Medical Command and Human Resources Command.” said Mula. “This is another example of where the Guard has proven that we are equally capable to our active component brethren.”

In 2018, 37 highly competitive projects and deployment nominations were completed. From those 37, the Army LSS Excellence Awards Program awarded fourteen organizations for their efforts. The awards recognized teams that used continuous process improvement and Lean Six Sigma methodologies to transform their business processes. Recipients were chosen by a selection board made up of nine representatives from organizations across the Army.

“We are extremely proud of our project team that received this outstanding recognition from the Under Secretary of the Army,” said Brig. Gen. Lee W. Hopkins, the LANG director of the joint staff. “Their process improvement project, which we implemented in our state, allowed us to save money, improve efficiency, and build more readiness.”

The LSS program reduces waste and increases readiness across the entire National Guard. LSS is a scientific method used for identifying waste and driving out variation in business processes.

“We’ve had a lot of constrained financial environments over the last few years,” said Mula. “So doing as much as we can with the limited resources we have is important. Every dollar we spend is a taxpayer dollar, and it’s our job to safeguard those and to use taxpayer money to the greatest benefit possible.”