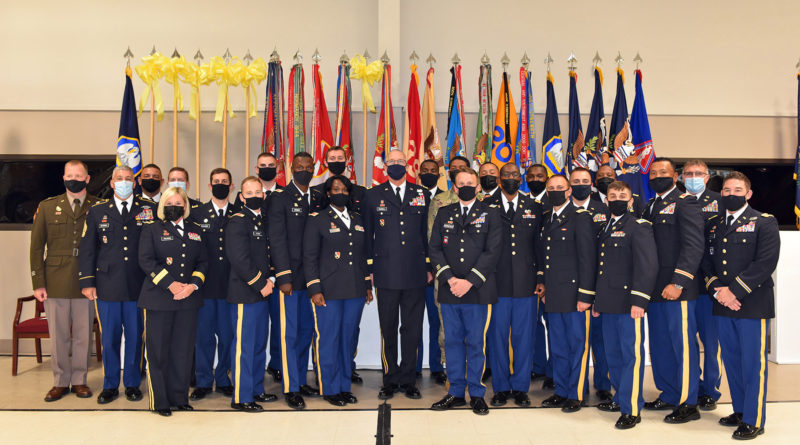 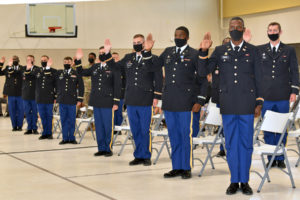 “Congratulations to class 61 and 62B for achieving this huge milestone in your life. I’ve had the good fortune to meet and talk with this group on several occasions, and my take away each time is how lucky we are to have such a great group,” said Waddell. “Always remember there are no office hours for leaders; your job is to enable success in every mission your unit undertakes.”

The 199th has conducted the Officer Candidate School (OCS) program since July 1960. Since graduating the first class in August 1961, more than 1,791 second lieutenants have been commissioned through Louisiana’s program. Officer candidates who attend LANG OCS may choose to attend either a traditional course, which replaces drill for one weekend a month and two annual training sessions over a period of 18 months, or an eight-week long accelerated course.

“This class was larger than last year, and we hope to double the size for the next class by using multiple lines of effort,” said Lt. Col. Jacques Comeaux, commander of 2nd Battalion of the 199th. “One of the main goals is to get potential candidates into the program and graduate them to lieutenants in order to produce more company-grade officers throughout the state.” 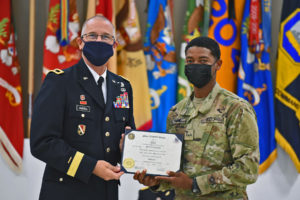 the 22nd candidate from Belize to have completed the program.

For 25 years, Louisiana and Belize have been state partners participating in the state partnership program. “We look forward to many more productive years with our Belize partnership, and we wish Lt. Baizar all the best in his service with the BDF,” said Waddell.

“The LANG OCS is a very established program with a great staff. It fosters leadership and professionalism, and instills the Army core values in each of its candidates. It has prepared me to be a leader,” said Baizer. “The most memorable moment for me is the constant look at different leadership roles, to see just how important leadership is even at the lowest level.”

The new officers were pinned their second lieutenant shoulder boards by family members during the graduation.

“Having my wife at the commissioning to pin on my gold bars meant a lot to me,” said 2nd Lt. Steven Salassi of Bush, La. “OCS was both physically and mentally demanding; we were confronted with a variety of situations that we had never encountered before.” 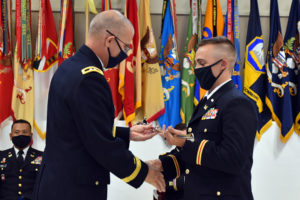 “My most memorable moment was the ride home, knowing I am about to go and lead hundreds of soldiers,” said 2nd Lt. Laroya S. Dickens, a Mississippi native. “I learned so much about myself, and the program really built a good foundation for me as a new lieutenant and as a leader.”

Officer candidates were presented awards for accomplishments in physical training, leadership and academics.

2nd Lt. Andrew Broussard of Youngsville, La., was awarded the Adjutant General’s Award for having the highest combined score in leadership, academics and physical training. He was also awarded the Army Commendation Medal for his exemplary performance.

The National Guard Association of Louisiana Award was presented to Broussard and 2nd Lt. Gavin Scott of Winnsboro, La., for having the highest physical training scores.

Scott was also awarded the Erickson Award as the runner-up for top graduate and presented with the Army Achievement Medal. 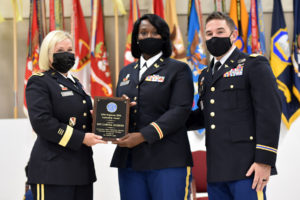 Salassi was awarded the Academic Board Award for prowess in academics.

Dickens was awarded the Leadership Award for highest leadership evaluation.

As a reward for their hard work, 2nd Lt. William Fenton from Haughton, La., and 2nd Lt. Joseph Douglas of Zachary, La., were chosen to attend Air Assault School after graduation.

The global pandemic restrictions and multiple state emergencies over the past year demanded additional manpower to operate the school house and brought many challenges for the LANG to navigate and still be successful.

Fenton said, “By the end of the course, I felt honored to work with the OCS cadre. These guys really had to pivot and adjust fire throughout the first few months of our training … they did a good job of ensuring we were getting the knowledge we needed to be successful.”

The mission of Louisiana’s Officer Candidate School is to train, mentor and commission the future leaders of the Louisiana Army National Guard.