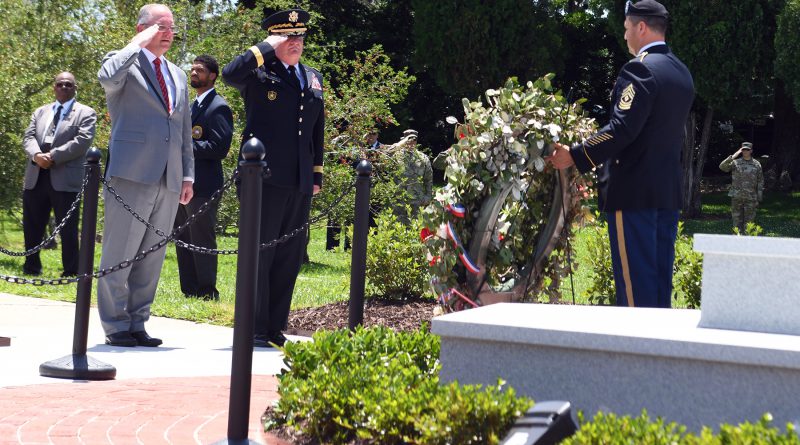 NEW ORLEANS – The Louisiana National Guard and Gov. John Bel Edwards dedicated a memorial to Guardsmen who made the ultimate sacrifice while serving their country in an official ceremony at the Louisiana Veterans Memorial Park in Baton Rouge, May 21.

“It’s fitting that we dedicate this memorial just in time for Memorial Day weekend. No family member should ever have to make the sacrifice that you made, and words don’t do the job to convey how much we appreciate you, that we honor your sacrifice, that we honor the fallen, but we do,” said Edwards. “This park, this monument and the Gold Star monument that we put up last September all serve to remind everybody who visits this park of the sacrifice being made today by so many people who are serving us and that have been made by those who were killed in the line of duty.”

The monument, a pedestal with the National Guard Minuteman on top, is surrounded by bricks with the names of the Louisiana National Guardsmen who have been killed since 9/11. It faces the monument dedicated to Gold Star Families in a symbolic gesture that LANG Guardsmen are watching over those families.

Maj. Gen. Glenn H. Curtis, adjutant general of the LANG, hosted the ceremony. Also in attendance were John Alario, Jr., president of the Louisiana Senate and Taylor F. Barras, speaker of the Louisiana House of Representatives.

“It’s great that we live in a country and a state that will stop for a moment like this to recognize what your Soldiers did in service to our nation,” said Curtis. “No family should have to go through what you went through and what you continue to go through.

After the ceremony, LANG Gold Star Families (who lost a loved one that served in the military) were gifted a duplicate brick with their loved one’s name engraved on it by Edwards and Curtis. “I am particularly thankful, as we should all be, for our National Guard,” said Edwards. “We have the finest National Guard in the United States of America bar none. They are great warfighters, they help us respond to natural disasters, they run Youth Challenge Programs … they do so much in Louisiana to contribute each and every day to our state and to our country and they have saved thousands of lives in the wake of events.”