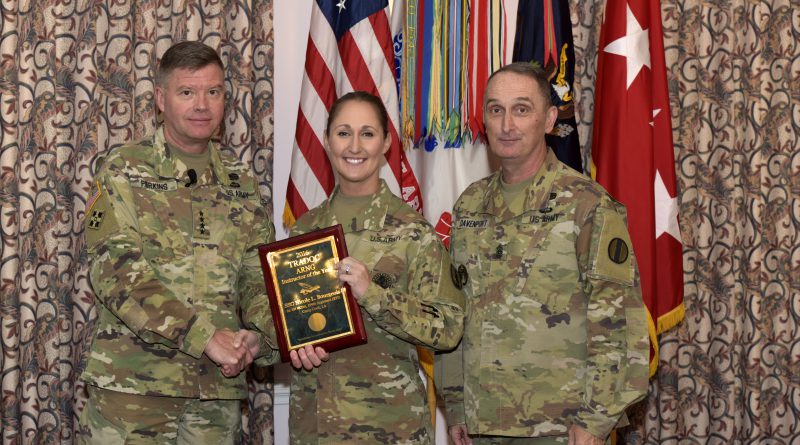 NEW ORLEANS – There is an old adage about educators that has been proven wrong time and again by those who instruct and mold minds under their tutelage.

Staff Sgt. Nicole Bourgeois, of the Louisiana National Guard’s 1st Battalion, 199th Regiment Regional Training Institute, located at Camp Cook in Ball, was recognized August 7 as the U.S. Army Training and Doctrine Command’s top National Guard instructor for 2016, proving that it is those who CAN do, teach.

Bourgeois, who was born in New Orleans and graduated from Jena High School in Jena, teaches active duty, National Guard and Reserve junior enlisted Soldiers the fundamentals of being non-commissioned officers at the Basic Leadership Course at Camp Cook. BLC is required for specialists to be promoted and join the ranks of NCOs as sergeants.

“She was a fireball that needed to be fine-tuned. She was also the backbone behind the success of the YCP at Camp Beauregard and has accomplished a lot during her short time as an instructor,” said Command Sgt. Major Dennis Sapp, the senior enlisted advisor of the LANG – Army. “I think it [being recognized] says a lot about the LANG and our Soldiers. I’ve always felt that she has a lot to offer the LANG. I’m proud of her.”

Bourgeois worked under Sapp near the beginning of her career as a cadre member of the LANG’s Youth Challenge Program at Camp Beauregard and named him as one her mentors that she still looks up to today.

“As an NCO, the title Instructor of the Year is the highest recognition a National Guard instructor can achieve and is a profound accomplishment that reflects greatly upon her as a staff sergeant and those who helped her to achieve this milestone,” said Command Sgt. Maj. Clifford Ockman, commandant of the RTI. “All leaders want to say that they have the best unit and Soldiers.  The Louisiana National Guard can proudly acknowledge that Staff Sgt. Bourgeois has validated that claim.”

Bourgeois said that she has always wanted to teach. When she was younger, she taught dance to young children. Shortly after joining the LANG, after returning from a deployment to Kandahar, Afghanistan, she became a cadre member for YCP under Sapp, where she taught and mentored at-risk youth for 10 years before moving on to teach young Soldiers.

“It was never a goal of mine to be nationally recognized,” said Bourgeois. “My goal when I started working here was to be the best instructor that I could be. Soldiers learn on all different levels, and it is my goal to get through to Soldiers and make sure that they grasp everything as I am teaching.”

As many successful people do, Bourgeois has a daily routine and a strong support structure that helps her be so good at her job. Her routine is one that is guided by a strong discipline.

“My day starts at two o’clock every morning,” she said. “I have to be at our daily meeting for work at 4:30, so I make sure that I am in my office checking my emails every morning at four, then get everything set up for the day for my class.”

These classes are more than just sitting in a classroom; a large portion of BLC includes tactical field training, and as every good leader, Bourgeois actually goes out with her students to show them exactly how to complete whatever task her students will be tested on. Bourgeois also said that fitness is important to her success and that she makes time for exercise, usually twice a day, in her busy schedule. Outside of work, Bourgeois said that her husband, David, is an important supporting figure to her. David is also a full-time member of the LANG, and his understanding of her job’s nonstop tempo is of immeasurable value to her.

“I often go to sleep between 6 and 7 p.m., so my husband and I spend only a few hours a day together,” said Bourgeois. “He’s always been very supportive of me and my dreams. I couldn’t do what I do without his love, support and encouragement. I’ve never told him, but he is also one of my greatest mentors.”

Although she has already been recognized as being the best of the best, Bourgeois still has several goals that she wishes to accomplish.

“I would really like the opportunity to go to drill sergeant school,” she said. “After working as cadre for the Youth Challenge Program, working as an instructor and being recognized as being pretty good at it, I think I am ready for the next challenge.”

The top NCO for the Louisiana Army National Guard agrees.

“Staff Sgt. Bourgeois has always showed the willingness to learn the right way of doing things,” said Sapp. “She’s one of the best young Soldiers I’ve ever worked with. You’ll see a lot more out of her in the future.”