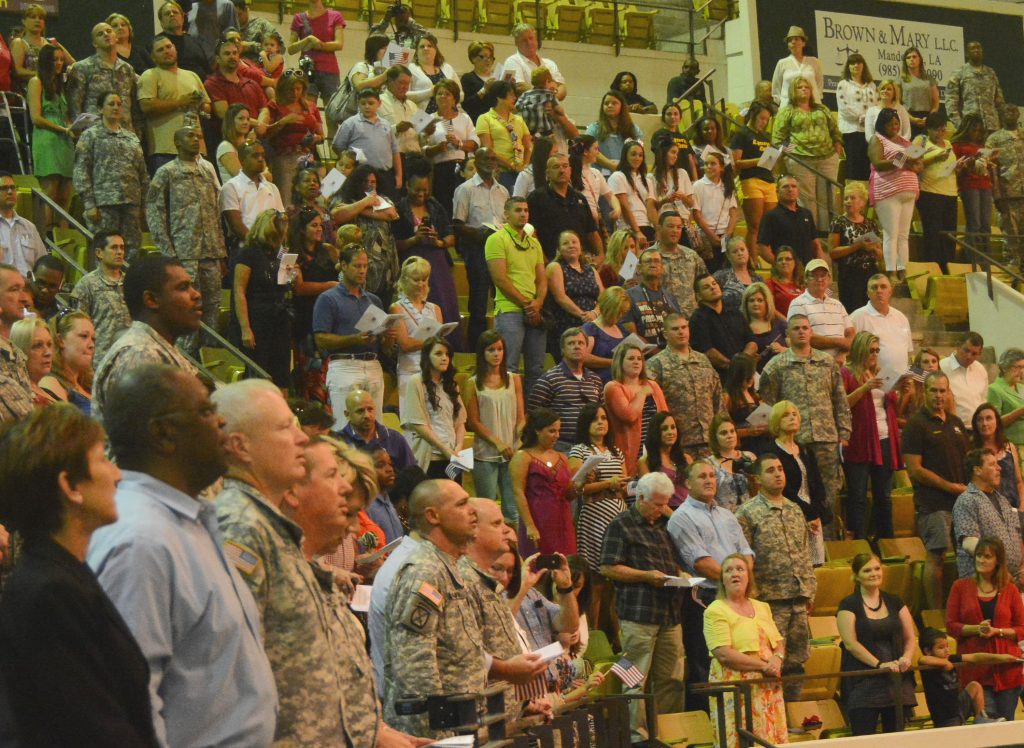 The 1021st, based in Covington, La., with two detachment locations in Independence and Gonzales, will deploy more than 160 Soldiers to Kuwait in support of Operation Enduring Freedom to conduct vertical construction operations, to include building, concrete, and plumbing and electrical systems.

Louisiana Gov. Bobby Jindal addressed the Troops on their upcoming deployment and thanked them for their commitment.

“We gather here today to honor the fact that your service is making an extraordinary and historic mark on our nation and the world,” said Jindal. “You are the heroes who have chosen to dedicate your lives to something far greater than yourself.”

Jindal also took time to recognize a select few Soldiers from the 1021st and how much their dedication meant to their unit, as well as their families.

Maj. Gen. Glenn H. Curtis, the adjutant general of the LANG, spoke to the Soldiers and their guests about what they could expect in the upcoming deployment.

“I know that you will represent our nation, our state and our Guard in a professional manner while you are deployed,” said Curtis. “To the families, I also want to say thank you for allowing your Soldiers to serve in the manner which they do.”

“I always tell people that Guardsmen are my favorite Americans,” said Curtis. “The majority of our Guardsmen are citizens working in the private sector the majority of the time. They have families that they raise and care for, and when our country calls, they never ask why…they just go.”

Before the conclusion of the ceremony, Capt. Noel S. Bellas, commander of the 1021st, took a moment to praise his Soldiers and offer some encouraging and motivational words.

“We have now passed the crawl and the walk phases, and now it’s time to run,” said Bellas. “The 1021st’s motto is ‘Above the Rest’, the 205th’s motto is ‘Come What Will’. We will embrace and live both mottos in order to represent the state of Louisiana while abroad.”

Before deploying overseas during the 365-day deployment, the unit will conduct mobilization training at Fort Bliss, Texas.

The 1021st has participated in the state response and recovery operations of Hurricanes Katrina, Rita, Gustav, Ike and Isaac, as well as the Deepwater Horizon oil spill and flood operations in 2011.