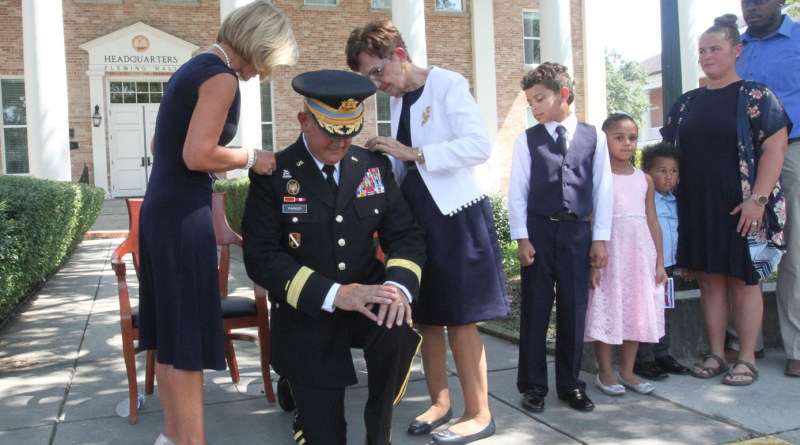 Parker currently serves as the LANG’s assistant adjutant general – Army. He is responsible for the deployment and coordination of programs, policies and plans affecting more than 9,000 Soldiers of the LANG.

Parker graduated from Ovey Comeaux High School in Lafayette. He holds a Bachelor of Science in General Studies from the University of Louisiana at Lafayette and a master’s degree in Strategic Studies from the U.S. Army War College.

“The lessons that I have learned from all of you are far greater than any man could ever hope for,” said Parker. “Each of you, in some way, have taught me what it is to be a follower before a leader, a listener before a talker, a man of action and not just a man of words.”

Parker enlisted in the LANG in 1986 as a chemical operations specialist and began his officer career in the infantry after he graduated from Officer Candidate School in 1989.

Over his 33-year military career, Parker has held command and staff positions at every command level. Most notably, he commanded the 62nd Civil Support Team, was chief of staff of the 225th Engineer Brigade in Baghdad and Iraq, and was deputy commander of the 139th Regional Support Group. He has also served in almost every major disaster in Louisiana since 1986, including Hurricane Katrina and the Deepwater Horizon Oil Spill.

“Don’t believe in kings, believe in the kingdom. We are all blessed to live in a country where freedom and democracy still exist and one person can make a difference when he is supported by people like you,” said Parker.

Currently, Parker resides in St. Amant. He and his wife, Wendy, have three children: Gregory Jr., Eva, and Megan.  They also have five grandchildren: Michael, Aniya, Savannah, Shaun III, and Piper, who is on the way.