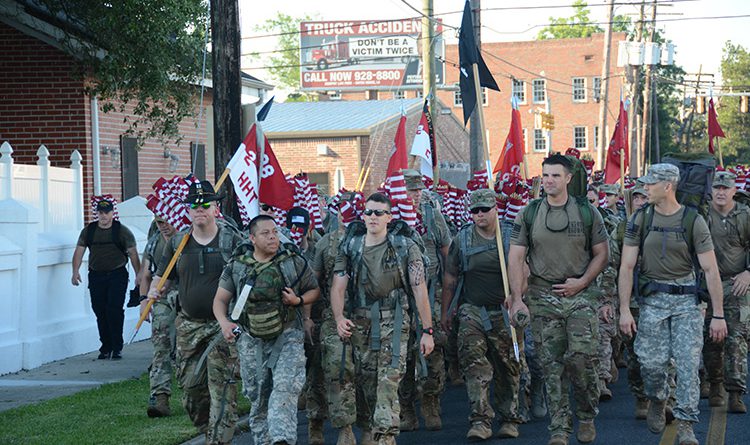 BATON ROUGE, La. – On May 26, hundreds of military personnel, veterans and area citizens reverently planted 11,000 American flags on the front lawn of the Louisiana State Capitol in honor of the state’s fallen Soldiers, Airmen, Sailors, Coast Guardsmen and Marines from the Revolutionary War to present.

This Memorial Day weekend event began four years ago with the Blue Star Mothers of Louisiana, an organization of women whose children serve in the military or are veterans, who according to their mission statement, “… support each other and our children while promoting patriotism. Our organization focuses on our mission every single day and will never, ever, forsake our troops, our veterans or the families of our Fallen Heroes.”

Janet Broussard, chapter president shared her motivation for being a Blue Star Mother and organizer of this event. “My child made it home, so this is the least I can do. We can’t forget them [those lost in war]. They’re all someone’s children.”

Members of the Louisiana National Guard joined forces with the Blue Star Mothers two years ago to organize a six-mile Hero Hump from LSU’s Memorial Tower to the state capital carrying many of the flags to be planted. Along the way, the ruckers stopped at the Baton Rouge Federal Cemetery and the USS Kidd to lay wreaths and honor the fallen heroes.

“I couldn’t be more proud to be a member of the group and see it double in size in the second year. We’re paying tribute in the way that we should be by bringing these flags here to the capital in a dignified manner to show our respect and our partnership with the Blue Star Mothers of Louisiana as we honor our Gold Star Mothers [women who lost their loved ones in war],” said Maj. Will Saint, commander of the LANG’s 62nd Civil Support Team.

Roughly 125 service members and veterans, plus those who joined along the way, congregated with waiting supporters in front of the capital to plant the flags. Brig. Gen. Pete Schneider, Louisiana National Guard’s assistant adjutant general – Air, addressed the crowd there and spoke of his pride in the dedication of the participants.

“… I wouldn’t miss this opportunity to walk … with my brothers and sisters of the Guard and the retirees who come here, on such a special and beautiful day we’ve been blessed with, to honor our families and to honor all those who have given the ultimate satisfaction,” said Schneider.