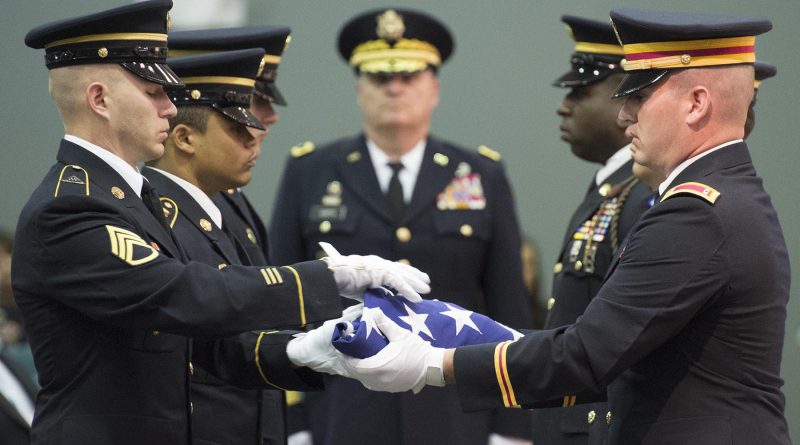 PINEVILLE, LA – “Whenever I feel myself becoming emotionally attached and wanting to mourn with the family, which is not our job, I always think to place the mission first. That gets me through the moment,” said Staff Sgt. Cody Standridge of the Louisiana National Guard’s 204th Theater Airfield Operations Group. “I’m there for a specific mission.”

Standridge of Prairieville, has a job like few others in the military – he is a member of a Military Funeral Honors team based out of the Gillis W. Long Center in Carville. His unit renders honors to show the deep gratitude of a nation to those who, in times of war and peace, have honorably defended our country. It’s the final demonstration of a grateful nation provided to a veteran’s family.

A few months ago, Standridge became the first LANG Soldier to perform 1,000 funerals. He said that many service members want to serve on the team, but they can’t because it is too emotional.

“This is very important what we do and we only have one opportunity to get it right. Family members remember this for the rest of their lives. If we mess up, we can’t fix that. Some people have the heart to go out there, but just lack the capacity,” said Standridge. “It’s not faulting them, they just can’t.”

Standridge joined the unit in 2009. Although he now serves in a part-time capacity, from 2011-2016, he worked full-time and served as the team leader. He explained that during a funeral, the team stands at attention, salutes the hearse and casket as it’s moving.

“Then we stand at attention and wait until the preacher is done because it’s God and then country. Then we’ll play taps and fold and then present the flag.”

His team goes wherever they’re needed to perform the funerals. There were times when six to 10 funerals could occur all in the same day. When he was full-time, he was often expected to work six days a week because of the high volume of funerals in Louisiana.

“We’ve been trained by the Old Guard to enforce their standards at a state level. We’re not people who are just told to go do it. We’re made up of entirely of volunteers of people who want to be a part of this. It shows in our performance,” he said.

Standridge explained that for the most part, the funerals the team performs are for older veterans that the families expected to pass away, that may have been in hospice or in a hospital.

“… When we play taps, it reminds them that he wasn’t just a frail old man who died in a bed. He was once young and did something that deserves to be proud of. That’s how it is for me,” said Standridge. “Whenever we’re out there, it’s not an older member of society, it’s someone my age that filled my shoes before me.”

For many, attending funerals day in and day out might seem a difficult thing to handle. But Standridge knew early on that this was the job for him.

“[My] third funeral … when we played taps there wasn’t a dry eye in the place. It brought home the importance of what we do and I couldn’t imagine anything else in the world that I’d be more proud to do.”

In order to wear the “Honor Guard” tab on the service uniform, members must complete an intense 40-hour training course. Standridge attended this course and was instructed by Spc. Michael Lichtey, 19. Not long after, Lichtey was accidently shot and killed.

Standridge said this mission was the toughest of his 1,000 funerals.

“Everybody on [the team] knew him. It hit everybody really hard when we lost him. I looked across [the casket] and everyone had tears running down their faces, which we are absolutely not allowed to do.”

Some of the many funerals Standridge has served on include the service for the last Soldier killed in action from the Louisiana Guard, the former adjutant general of the LANG, Maj. Gen. Ansel M. Stroud Jr., and three of the funerals for the crew of the MOJO 69 Blackhawk crash in 2015. He said during one of the MOJO 69 funerals, as the wife of one of the fallen and her young children passed by the team, she leaned down to her children and said, ‘This is for your daddy.’

As anyone would imagine, Memorial Day hits Standridge hard each year.

“It is by far the hardest day of the year for me. This is the first year since 2009 I haven’t been doing a funeral or deployed,” he said, wishing for the distraction. “It’s a lot harder this year not having a mission to complete.”

Sgt. First Class Derek Callaway, non-commissioned officer in charge of the Military Funeral Honors team, has served with Standridge since 2010.

“Cody is a very dedicated Soldier who goes above and beyond to give fallen veterans the honors they deserve,” said Callaway. “It is not an easy assignment he volunteered for, but his desire to serve pushed him to complete something few can say they have. We are very proud of him.”