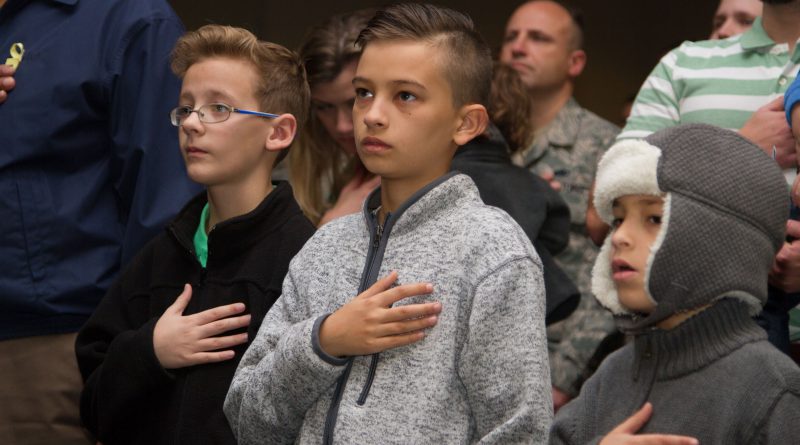 PINEVILLE, La.– More than a dozen Airmen with the Louisiana National Guard’s 259th Air Traffic Control Squadron, with their friends and families, gathered for their deployment ceremony at the Camp Beauregard Post Theater, March 4. This military tradition gave friends and families a chance to bid farewell to their loved ones until these Airmen return later this year from Iraq.

“As an air traffic control squadron, we have mobile air traffic control equipment,” said Lt. Col. Kevin Eggler, commander of the 259th. “We go anywhere in the world that’s needed and help set up airfields. This particular mission will be for radar approach control. It’s important because we are supporting the Army in their endeavors in Iraq.”

Before deploying, the Airmen are scheduled to conduct mobilization training at Fort Dix, New Jersey. For some, like Senior Airman Romeo Reyes-Carvin, it’s his first time to deploy. Reyes-Carvin said he’s excited to go. “When they asked who wants to go, I was the first one to raise my hand.”

Reyes-Carvin’s girlfriend, Michelle Castro, has family who have deployed previously, but says things are different now that her significant other is the one to go.

“I’m nervous, but I think that’s natural. If anything it will strengthen the relationship,” said Castro, who plans to send care packages, letters and video conference with Reyes-Carvin if possible.

When addressing the group, Maj. Gen. Glenn H. Curtis, the adjutant general of the LANG, had nothing but positive things to say about the the way the unit answered the call for them to deploy.

“I try to tell them all the time, I consider them my favorite Americans because of their willingness to answer that call. When you look at our nation today, right around one percent … serve our nation,” said Curtis. “You really are my heroes, and I appreciate what you do more than you will ever know.” While on stage, Curtis awarded the 259th the F. Edward Hebert Meritorious Unit Commendation for exceptionally meritorious conduct during the August 2016 catastrophic flooding that submerged thousands of homes and businesses. The squadron worked with the 122nd Air Support Operations Squadron and members of the 159th Fighter Wing to provide security and logistical support at the evacuation mega-shelter set up at Celtic Studios.

“We did some outstanding work in Baton Rouge,” said Master Sgt. Joseph Smallwood, the 259th senior enlisted advisor. “A lot of these guys that were in Baton Rouge are the same ones going overseas. Now we just get to honor our national mission. We’ve trained for air traffic control all our lives. We know what to do, now we just need to go execute on behalf of the nation.”

The 259th has deployed Airmen multiple times to Afghanistan and Iraq in support of Operation Enduring Freedom and Operation Iraqi Freedom. The 259th supplied mobile air traffic control support from Zephyr Field during the state response and recovery operations in the aftermath of Hurricane Katrina.