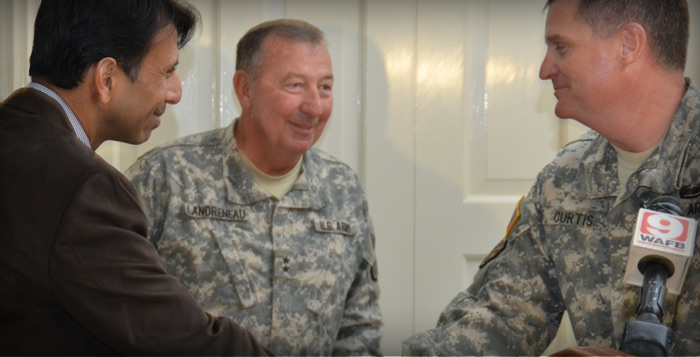 BATON ROUGE – Today, Governor Bobby Jindal announced the retirement of Adjutant General Maj. Gen. Bennett C. Landreneau from the Louisiana National Guard, and the appointment of Brig. Gen. Glenn Curtis as adjutant general. Landreneau will retire as the longest, current serving adjutant general in the nation with nearly fourteen years of service as head of the LANG.

Governor Jindal said, “After more than four decades of service to Louisiana and our nation, General Landreneau told me he is ready to retire from the National Guard and begin the next step of his life. I want to personally thank General Landreneau for his counsel and leadership over the past four years.  He’s been at my side every step of the way as we faced hurricanes, an oil spill and flooding. No matter how many times we have called on General Landreneau and the National Guard, they have always performed above and beyond the call of duty.

“I’m proud to announce that the National Guard will begin a new chapter under the leadership of Brigadier General Glenn Curtis. Over the past four years, I’ve had the opportunity to work closely with General Curtis. He’s been a top advisor to General Landreneau and been at the center of every disaster response operation over the past four years.  With nearly three decades of decorated service in the National Guard, General Curtis is ready to lead the Louisiana National Guard. My top priority as Governor is the safety and security of our people and I know that General Curtis shares that priority. I’m confident that General Curtis will carry on General Landreneau’s legacy of strong leadership and will have our brave Guardsmen ready to help our state no matter what challenges we may face.”