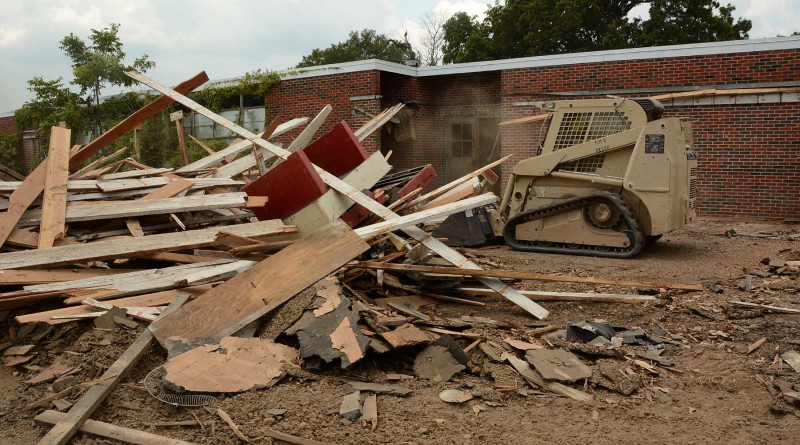 PIONEER, La. – For the past two weeks, Soldiers with the Louisiana National Guard’s 921st Engineer Company, 528th Engineer Battalion, 225th Engineer Brigade have been conducting their annual training with a special project just down the road from their armory.

The troops, from a detachment in Oak Grove, are assisting the nearby village of Pioneer by tearing down a dilapidated school that has become an eyesore to the community.

Pioneer High School, which was constructed in the 1930s and closed in 1979 has been vacant and deteriorating for decades.

“It’s a relic of the past and we just want to wipe this one out and remember what it looked like years ago,” said Mack Albritton, the last principal at the school.

Some of the Soldiers working on the project share those memories

“Oak Grove and Pioneer are small towns. A lot of these soldiers, or their parents, went to that school,” said Capt. Cody Paulk, commander of the 921st. “It’s great for them to be able to give back right here in their community.”

Staff Sgt. Allen Henderson, a heavy equipment operator with the 921st agreed. “The community supports the Soldiers a lot, so it’s good when the Soldiers get to come back and support the community,” he said. “It’s like a two-way street, they are always backing us and now we get the chance to back the community.”

In addition to helping the community, the project also helps the unit increase their readiness and capabilities.

“We have quite a few new soldiers, this is the first project that they have been able to put their training to use,” Paulk said. “This project is 12 days, so they’re able to see the project through from beginning to end in their annual training period. They get to see exactly what goes into a project from start to finish.”

After demolishing the structures, the Soldiers hauled off more than 175 dump-truck loads of debris, which the parish will use as fill on other projects.

Mayor Sonia Reiter says the town wouldn’t be able to get the job done without the assistance of the Louisiana National Guard.

“Words can’t describe how much we appreciate it,” Reiter said. “They have been a blessing to us, and they are all good guys. We appreciate them more than they will ever know.”

The village has no set plans for the site once it is cleared, but Reiter says she wants to create a monument on the site so people can remember what the school looked like in its prime.