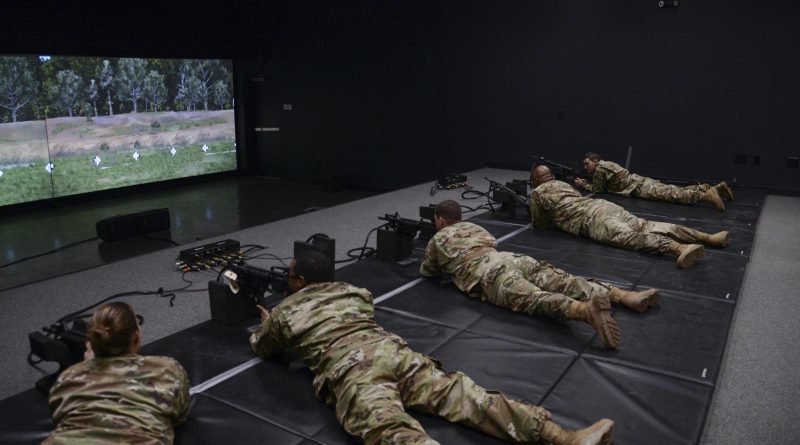 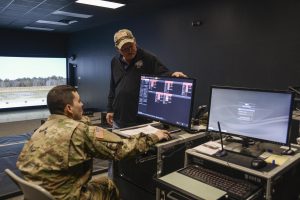 The Engagement Skills Trainer II is designed to assist and improve basic fundamentals of marksmanship, as well as collective and escalation of force training before going to a live-fire range.

“The National Guard doesn’t have much time on their drill weekends when it comes to training,” said Mark Lamb, senior training aids, devices, simulators and simulations instructor for Louisiana and Mississippi. “The EST II allows them to work with the Soldiers and not have to pay for extra rounds of ammunition they may need if a Soldier is struggling on a range.”

Units who train on the EST II can also upload maps from different locations, and are able to alter weather conditions during the simulation.

“The EST II benefits the Soldiers by giving them a more relaxed training environment to improve their marksmanship skills,” said Sgt. Mark Breaux of the 2228th Military Police Company. “Soldiers still get the full effect of being on a range, but they can have more one-on-one coaching in here.”

Lamb explained the biggest differences between the EST II and the older EST 2000 are the coaching tools, authoring program and a collective training feature, called Virtual Battle Space 3.

“With the old system a shooter would run a scenario then be finished,” said Lamb. “This new system allows us to build a 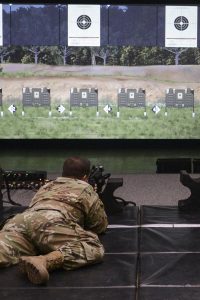 tactical scenario or a particular training environment specific to whatever unit is using the system.”

The new collective training element allows platoon or team size elements to execute simulated scenarios such as ambushes, react to contact, patrols or search for improvised explosive devices. It also adds coaching tools so Soldiers can review their performance after a simulation.

“The VBS 3 allows you to design a scenario for squads and sections to maneuver through terrain and engage enemies and targets,” said Lamb. “The operator can set the scenario up for a squad to maneuver to a certain area to find the enemy or combatant, or we can make it so they have to react to friendly fire.”

Soldiers training on escalation of force, for example, can use the EST II to train on how to correctly react to scenarios such as riots, civilians on the battlefield or active shooter scenarios. Breaux said that the ability to custom tailor the simulation to different scenarios is especially helpful to train for his job as an MP.

“In here, the Soldiers aren’t scared of getting hit by a paint round like at a shoot house,” he said. “We can see what they are doing and tell if they are panicking based on what the EST shows us. This then allows us to coach them one-on-one and teach them how to remain calm in different situations.”