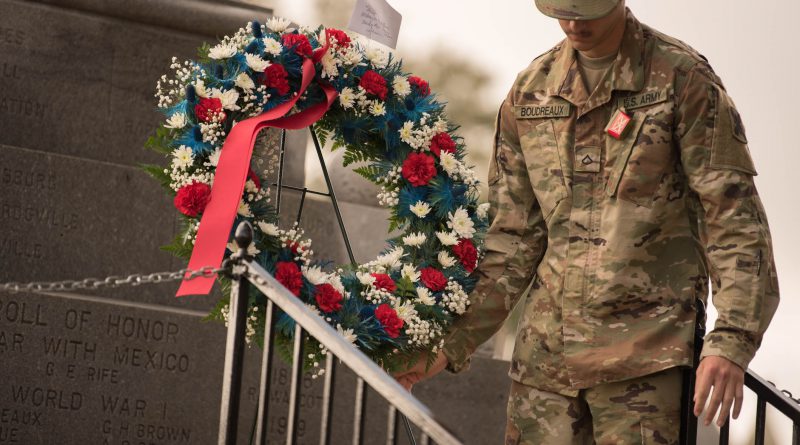 These two ceremonies reflect the long and decorated history of the 1-141st. The Washington Artillery Veterans Association has sponsored the wreath-laying ceremony since 1965 as a way to honor the unit’s fallen Soldiers and remember its heritage. 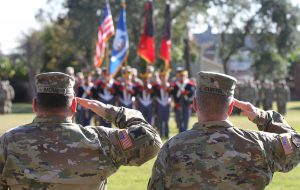 Commander of the 1-141st, Lt. Col. Joseph M. Barnett, addressed his battalion on the cemetery’s grounds and conveyed the significance of their presence in front of a memorial erected to the unit’s fallen.

“For 180 years, in an unbroken line, the Washington Artillery has answered the call of arms in defense of our great state and our great nation. We have all answered without hesitation and will again when called,” said Barnett. “We honor those who came before us here today, not just with this wreath of flowers, not just with a canon salute or taps: we honor those who came before us most of all with our service and our commitment to those values that they held dear.”

The following day, Guardsmen of the 1-141st participated in the battalion’s 180th pass-in-review ceremony. The long-standing custom displays the might of the assembled troops who march in formation for their leaders to view.

The LANG’s 156th Army Band ushered in the arrival of the official party which included Maj. Gen. Glenn H. Curtis, adjutant general of the LANG, followed by the unit’s command.

During his speech, Curtis spoke highly of the 1-141st.

“For 180 years, we’ve had red legs in the state of Louisiana or somewhere on the foreign battlefield defending our nation. It’s quite a tribute to your success and to what you’ve brought to this nation,” Curtis told the battalion. “I’ve watched a lot of artillery units shoot and nobody puts steel on target like the 141st. I’m very proud of the way you do that and continue to do that.”

During the ceremony, awards were given to the top performing Soldiers from the battalion. 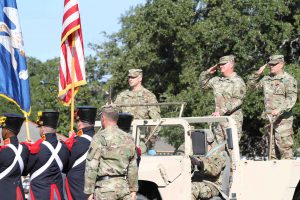 In his remarks, Barnett said his Soldiers’ efforts are unmatched, their courage unyielding and that they motivate him to become a better leader.

“The pathway you’ve followed in preparing the battalion for the Joint Readiness Training Center and beyond has not been an easy one,” said Barnett. “It has not been traversed overnight, it has been an uphill battle, but everyone in this formation has risen to the call time and time again, so thank you.”

The 1-141st, which falls under the 256th Infantry Brigade Combat Team, is the oldest unit in the LANG and the oldest field artillery battalion outside of the original 13 colonies. It has a storied history in the state from its involvement in the Civil War to emergency operations, such as Hurricanes Katrina and Rita, as well as recent deployments to Iraq in support of Operations Iraqi Freedom and New Dawn.